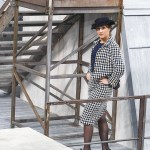 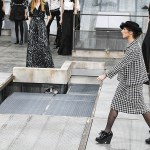 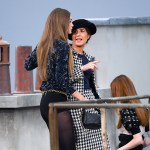 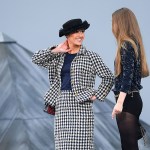 Marie S’Infiltre gained a new level of fame after storming the catwalk at the Chanel fashion show and being escorted off by Gigi Hadid. But gatecrashing is kind of her schtick — here’s what you need to know about the French YouTuber.

It’s hard to imagine anyone upstaging the models walking the runway at the Chanel fashion show during Paris Fashion Week. But on Oct. 1, Marie S’Infiltre, 28, did just that. No, Marie is definitely not a wanna-be model, as the audience found out when she was escorted off the runway by none other than Gigi Hadid. So, what’s her deal exactly? And why is she proudly displaying the incident on her Instagram, too? Here’s what you need to know about Marie S’Infiltre.

1) She’s considers herself a comedienne. In case it wasn’t clear by her cringeworthy display on the runway, Marie specializes in satirical comedy. Her main target is the French bourgeoisie, making the Chanel runway a perfect place to break out some of her comedy chops. Marie has gained a lot of attention in France for ‘infiltrating’ a slew of high-profile events. Often, her gatecrashing has a purpose behind its comedic edge. In 2017, she crept into the campaign rally for right-wing candidate Marine Le Pen. The video Marie took completely exposed the amount of bigotry among Marine’s supporters, as Marie used her comedic chops and sleek editing skills to inadvertently make fun of the attendees.

2) She’s NOT an activist. Despite what some of her antics might make you believe, Marie says that she’s not actively fighting for any cause. Instead, she just wants to reveal the absurdity of the world. In an interview with Buzzfeed back in 2017, she shared that her approach “has never been political, I want to show that all interests have a ridiculous comic potential.”

4) She has a YouTube show…and another show. Marie’s YouTube series started in July 2014. Her online videos focused on the ‘prankster’ antics she’s known for, with Marie sneaking into events and exposing the bourgeoisie, bigotry and more. But the comedienne has also worked on a show called Le Show Inouï. The title roughly translates to “The Inoui Show” in English. The show ran every day from Thursday to Sunday in May of 2018 at the Studio des Champs-Elysees in France, with a description that read, “In one hour, Marie gives you all her unsurprising secrets…to apply right out of the Show Inouï to shine in society!” So, an appear rich quick scheme? We’d be down.

5) She’s not new to controversy. Honestly, the news around Marie walking the runway at Paris Fashion week isn’t anything new. She once infiltrated a Gay Pride Festival in July 2018. Her original intention was to expose the character of those who were against gay rights, but instead, it just upset a lot of people. The video and its description generated some controversy because Marie described the video on YouTube as a “good-natured pagan festival where you can touch small butts with impunity.” Yikes! She was quickly called out by members of the LGBTQIA+ community, to which she responded, “Dear LGBTQI + community that I love so much, for your tolerance and your open-mindedness, I hear your grievances, but I had to test you on your self-deprecation, your sense of humor…You would not support your own satire?” If this tells us anything, we probably won’t hear an apology from Marie to  Gigi, the models, or the spirit of Coco Chanel after her recent stunt at Paris Fashion Week.