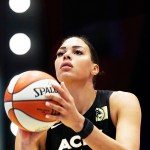 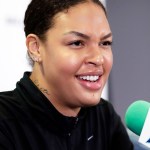 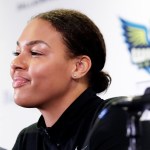 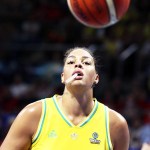 Photos from ESPN’s 2019 ‘Body’ Issue are here, and they include gorgeous shots of Australian basketball star, Liz Cambage, who stripped down for the shoot.

Liz Cambage is one the gorgeous women who has been chosen to pose nude in ESPN’s annual Body Issue, and she looks absolutely stunning in the photos. Liz is a basketball player from Australia who plays for the WNBA’s Las Vegas Aces. In one of her pics, she poses with her back to the camera while holding a silver basketball and wearing absolutely nothing else. Her hair is slicked back into a ponytail, and she’s whipping her head around to give the camera a sultry glare. In another shot, she’s laying on her stomach on the ground, with her bare booty on display once again

“I love my whole body. I’m proud of my whole body, every inch — my soft, soft skin, my big lips, my crazy hair. I just love me,” Liz says in a behind-the-scenes video from the shoot. “Everyone has insecurities. I was bullied a lot for being very different wile growing up. I’ve always just been head and shoulders above the rest. I was very uncoordinated, wasn’t sporty at all. It took a lot of patient coaches working with me and spending extra time with me to really embrace my body and use my body to the best advantage.”

The BTS video shows her posing in a series of other shots, including one where she hangs off the rim of a basketball hoop while totally nude! She also discusses her diet and how it helped her feel better than ever. “I’m a big believer that what you eat is the energy that you give yourself,” she explains. “I went plant-based last year. I stopped eating meat and two weeks later, I had my 53 point game, so I know it was a sign that I was on the right track. I started playing the best I ever had.”

Other stars featured in the 2019 ESPN Body Issue include Chris Paul, Brooks Koepka, James Hinchcliffe, Katelyn Ohashi, Amanda Nunes and more. The issues will hit stands on Sept. 6, and this will be the last year that they are featured in print.