Kristen Stewart and Robert Pattison split for good in 2013, but their very private romance is still a hot button topic. She recalled her relationship with The King actor, 33, in a new interview, and explained that they’d kept their romance private because it was something that they had the power to control. “When me and Rob were together, we did not have an example to go by,” Kristen, 29, said in the October cover story for Harper’s Bazaar UK, published on September 3. “So much was taken from us that, in trying to control one aspect, we were just like, ‘No, we will never talk about it. Never. Because it’s ours.’“

The Twilight costars first began dating after playing love interests in the 2008 movie. Their relationship famously carried on throughout the franchise’s follow-up films. From red carpets to different Twilight events — the couple had completely dominated national and international headlines at the time. However, both Kristen and Robert, for the most part, managed to keep their private life private.

The pair eventually split in 2012, after photos surfaced of Kristen kissing her Snow White and the Huntsman director Rupert Sanders, who was married at the time. Nonetheless, Kristen and Robert decided to give their relationship another try shortly after the scandal. They split for good in 2013. 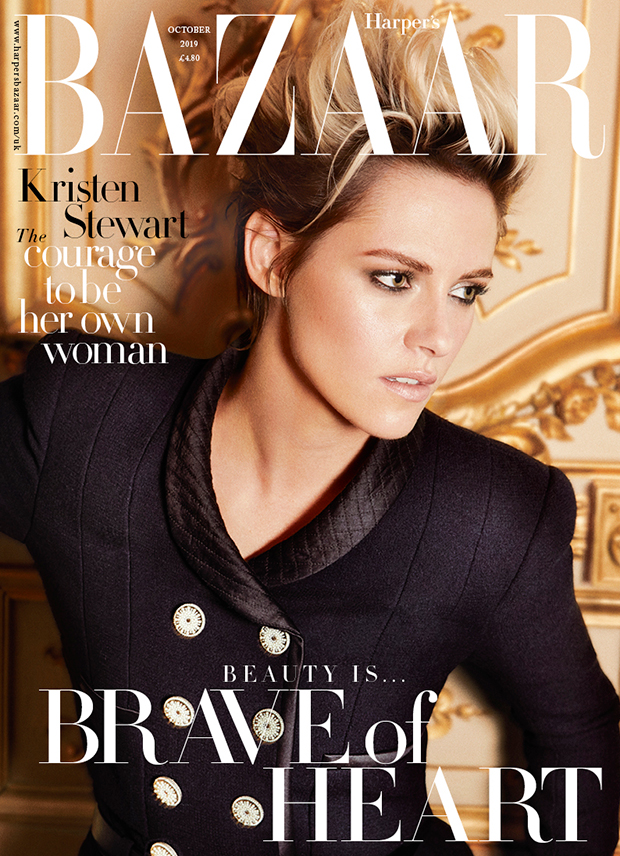 Kristen, who’s usually very quiet about her love life, has learned how to navigate through the media attention since her high-profile romance with Robert. “Every day I get older, life gets easier,” she told Harper’s Bazaar UK, explaining that she’s no longer afraid to speak her mind because of the evolution of young actors and how they carry themselves. “They have this insane agency,” she admitted of her younger peers. “And the confidence! That is baffling! I’m like, ‘how are you so confident? You’re so young!'”

The actress, who said that she was “like, so gay” during her 2017 Saturday Night Live monologue, told the mag that she’s not a fan of labels. “I just think we’re all kind of getting to a place where — I don’t know, evolution’s a weird thing — we’re all becoming incredibly ambiguous,” she said, adding, “And it’s this really gorgeous thing.”

Kristen, who has recently been romantically linked to screenwriter, Dylan Meyer, went on to explain why she decided to open up about her sexuality. “I think I just wanted to enjoy my life. And that took precedence over protecting my life, because in protecting it, I was ruining it,” recalled, asking herself at the time: “What, you can’t go outside with who you’re with? You can’t talk about it in an interview?”

She continued: “I was informed by an old school mentality, which is — you want to preserve your career and your success and your productivity, and there are people in the world who don’t like you, and they don’t like that you date girls, and they don’t like that you don’t identify as a quote unquote ‘lesbian,’ but you also don’t identify as a quote unquote ‘heterosexual.’ And people like to know stuff, so what the f— are you? I have fully been told, ‘If you just like do yourself a favor, and don’t go out holding your girlfriend’s hand in public, you might get a Marvel movie.’ I don’t want to work with people like that.”