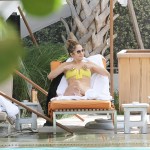 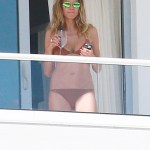 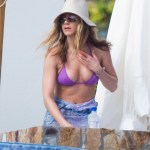 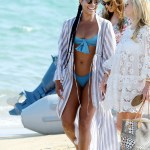 Sofia, who is actively shooting the last season of ‘Modern Family,’ looked drop dead sexy while vacationing with some gal pals in a stunning tropical location!

Sofia Vergara, 47, is simply ageless! The Colombian beauty has been posting up a storm on her personal Instagram account, as she enjoys a glam tropical getaway with a group of girlfriends. Sofia posted a photo of herself in a white strapless tankini, a matching swimsuit bottom, and ultra sheer sarong skirt on Wednesday, August 28. The 47-year-old’s sexy curves were on full display in the snap, with her hair perfectly blown out.

Sofia appears to be holding an adult beverage in the picture, as she poses with a gorgeous girlfriend — also in white — on an outdoor patio. The location looks absolutely picturesque, with palm trees behind them and the pristine ocean peeking through behind them. While Sofia didn’t share her exact location, she did hint at being somewhere in Florida or the Bahamas in her caption, which was “Esperando a Dorian💦🌊” — which translates in English to “waiting for Dorian.” Dorian is a reference to the Hurricane that is currently threatening the area.

Sofia’s peek-a-boo white skirt seems to be a favorite on the trip, as she rocked it yet again with a neon yellow one piece in a photo on Thursday, August 29. The trip appears to be a girls’ getaway from Sofia’s various photos, as husband Joe Manganiello is nowhere to be seen — but the hot couple were recently spotted on a ritzy getaway to Italy for their five-year anniversary.

Sofia is soaking up the last few days of summer, as she will be busy shooting the final season of Modern Family once she returns to Los Angeles. Sofia has, of course, been a part of the show since the series premiere back in 2009 portraying the lovable and hilarious Gloria Delgado-Pritchett. The series began production in July and premieres on ABC September 25.