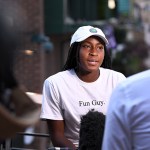 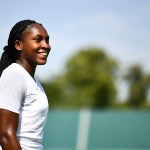 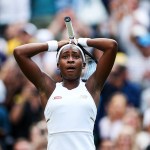 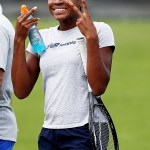 Coco Gauff is the one to watch after she upset Venus Williams at Wimbledon. The young tennis star spoke to HL about her plan to dominate the US Open.

The future is here! Cori ‘Coco’ Gauff, the 15-year-old up and coming tennis star, received the wildcard entry for the 2019 U.S. Open, and has already proven herself in her first match against Russian Anastasia Potapova. Ahead of the New York-based grand slam, Coco spoke to HollywoodLife in an EXCLUSIVE interview at the 2019 Lotte New York Palace Invitational, where she joined tennis icons Serena and Venus Williams and Rafael Nadal, in a badminton tournament! “Honestly, my goal heading into the US Open is just to stay calm, focus and continuing to have fun,” the Florida native said. “This is my favorite slam, so I want to make the best of it.”

The young legend rose to fame in June after she beat Venus Williams on opening day at Wimbledon. “It was an overwhelming emotion,” Coco said of her victory at Wimbledon. “I was already pretty nervous to play her, in general, as someone you looked up to since you were practically born, and then play them! I was in shock, and when I shook hands with her I was just telling her everything that I’ve ever wanted to tell her, because I’ve met her before, but I’m a chicken so I was too scared to say it.”

She continued, “I already knew before the match that I would tell her what I wanted to tell her, but I honestly thought I would lose.” Coco admitted life hasn’t changed too much since she became an overnight tennis sensation, saying, “I’m the same person. I’m still learning, I’m still happy, goofy. I’m just super grateful that people actually kind of like me and support me, and I hope that I can do better in the future.” It’s safe to say, Coco Gauff definitely is the future!

She vollied against the Williams sisters with Rafa as her doubles partner in a light-hearted badminton match in the stunning courtyard of the Lotte New York Palace, while fans cheered them on and enjoyed cocktails, Chateau D’Esclans Whispering Angel. Tennis stars Alexander “Sascha” & Mischa Zverev, Sam Querrey, and Daniil Medvedev also joined in on the fun at the event just days before the US Open kick-off. Lotte New York Palace Executive Chef Cedric Tovar served tennis-themed bites during the event, including Kobe Beef Sushi, inspired by Serena Williams, and the Chorizo and Saffron Arancini, inspired by Rafael Nadal. So yummy!