While Wife Appreciation Day is a month away, Justing Bieber just couldn’t wait, gushing over Hailey Baldwin in a romantic post where he called her ‘the greatest thing’ to ever happen to me.’

Justin Bieber, 25, and Hailey Baldwin, 22, are one month away from celebrating a year of wedded bliss and he just couldn’t contain his love for her in a gushing Instagram post on Aug. 15. He shared a series of eight photos you can see here of his lovely bride, everything from modeling shots to her holding a puppy and wrote, “I fall more in love with you every single day. You are the greatest thing that has ever happened to me. I would be lost without you. #wifeyappreciationday.” Awww!

He’s actually one month ahead of himself as 2019’s Wife Appreciation Day is on Sept. 15 (it’s always celebrated on the third Sunday in September) but who can blame him for wanting to share his feelings when he’s so madly in love with Hailey. Just nine minutes after he post his devotion to his wife with his 117 million followers, she wrote “best friend” in the comments, which picked up nearly 5,000 likes in the 22 minutes after he shared the message.

The couple tied the knot in a New York courthouse ceremony on Sept. 13, 2018 so they’re coming up on their magical one year anniversary. The pair has yet to have a big formal wedding though, as there had been a couple of dates floated including one near his March 1 birthday but the ceremonies just never went down. But with the love they share and the happiness they have as husband and wife, it just goes to show you don’t need a big wedding ceremony to have a solid marriage. 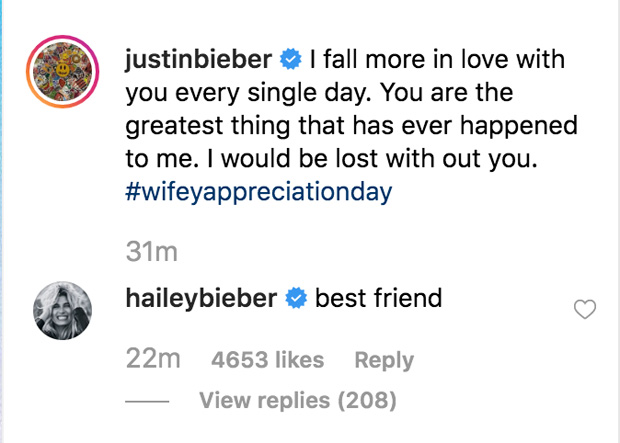 The couple has spent the last 11 months as husband and wife by each other’s side on a nearly constant level. While Justin has been seen going in and out of come recording studios, his music career has come second to being a good husband to Hailey. He had a brief personal rocky spell in February and March of 2019 where he opened up about anxiety and going through a “rough patch” where he was “feeling super disconnected and weird,” but his life became more sunny as spring and summer came along. With Hailey’s support he came out the other side and they’ve spent the summer in LA going on romantic dates, to healthy hot yoga classes, and enjoying time just being a married couple by not being in a rush to have kids right away.