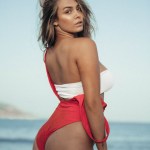 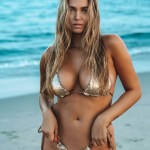 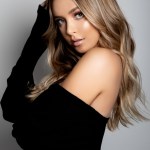 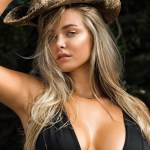 Raine Michaels opened up about her relationship with her dad Bret Michaels in a new interview with ‘New York Post’ and admitted he doesn’t mind that she’s gained success from modeling in tiny bikinis.

Rocker Bret Michaels‘ stunning daugher Raine Michaels, 19, has been owning the spotlight in her new successful modeling career and in a recent tell-all interview, she spilled the beans on what inspired her to flaunt flattering bikinis in the first place, and revealed how her dad’s handling the whole thing like a pro. It turns out one of Raine’s biggest idols is Kate Upton, 27, and after seeing the blonde model in a bikini on the cover of the Sports Illustrated Swimsuit issue in 2013, she decided she wanted to follow in her footsteps.

“She’s been one of my idols since I was 13. She has a more voluptuous figure and we have similar body types,” Raine told the New York Post. “When I saw [Upton] in that Antarctica shoot, I was like, ‘We kind of look alike. I see my body type being represented in the modeling world.’ She represented everything I want to represent.” Raine’s inspiration led her to being named a model-search finalist in this year’s Swimsuit Issue (Brooke Nader ultimately won the competition), which has allowed her to pose for many photos in various tiny bikinis. “It was honestly insane,” she said about the once-in-a-lifetime experience.

As far as 56-year-old dad Bret goes, Raine says he’s cool as a cucumber with her confidently posing in barely-there swimsuits because he wants to be supportive of her dreams and understands them since he’s worked hard to make his own music dreams come true. “Not all dads are super-supportive of their daughters going out to model in skimpy bikinis,” she admitted. “But [my dad] has been in this ­industry for so long, he knows it’s not weird.”

Although Raine’s dad, who gained fame in the mid-1980s as the frontman for the rock band Poison, is well known to many, and her mom, Kristi Gibson, worked as a model in the past, the young star revealed that her modeling career still didn’t come easy. After signing with with an agency when she was 16, she was told she needed to slim down before she could get modeling gigs.  She was a size 2. “They kept telling me I needed to lose weight — and it was the skinniest I’ve ever been,” she said. “I felt like it was the end of the world. I was like, ‘I’m fat.’” She then went on to start a strict diet of just chicken and vegetables and worked out twice a day to meet the agency’s requirements. Eventually, the pressure became too much and Raine had enough. “When I kept losing weight and they kept saying I had to lose a little bit more, I was like, ‘I can’t do this. This is me.’ ”

Things changed for the better for Raine in January, when she happily signed with One Management NYC, a company that accepted her curves. “They were like, ‘We love you as you are. Don’t change,’” she told the Post. “The modeling world is moving away from the one body type.” Raine, who previously studied journalism at Belmont University, now stays in shape by taking hot yoga and hot boxing classes and plans on further pursuing her modeling career by moving to New York City in the fall, when she will also enroll in online college courses. If modeling doesn’t work, she would love to turn over to entertainment journalism.