Wendy Williams just gets better with age! The talk show host, 54, stepped out in tiny, white shorts ahead off her birthday on Thursday, and the single life is doing her good. Wendy was photographed greeting fans, who lined up outside her show studios, on Wednesday, as she put her fit physique on display. She waved to the crowd as she made her way into work in a casual white t-shirt, mesh stockings and sneakers.

The mother-of-one was spotted out after she made a fashion statement on the city streets just one way prior. Wendy was photographed in a sultry, beige maxi dress and black fuzzy slippers on Tuesday while heading to work. She’s been out and about much more these days ever since she filed for divorce from her now estranged ex-husband, Kevin Hunter.

Wendy filed in early April and subsequently moved into her own apartment in New York City. The couple previously shared a home together in New Jersey. Now, she’s back in the dating game, and her social life is booming. Wendy’s also enjoying a new man in her life. She revealed on her July 10 show that she’s dating a 50-something-year-old muscular doctor, who she’s crazy about! 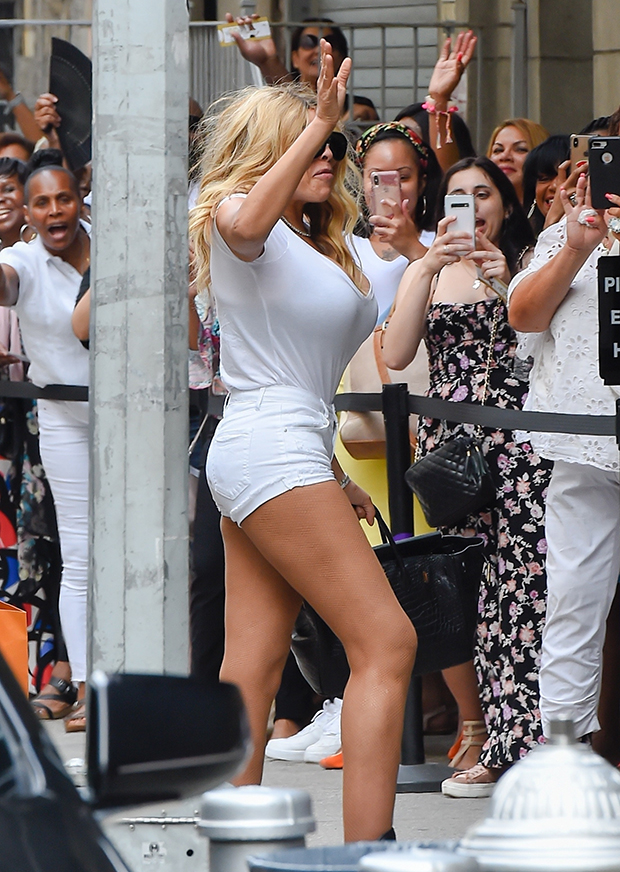 Wendy has never looked happier and healthier ahead of her 55th birthday on July 18. The host plans to work on her special day, but her talk show won’t follow its normal format. Wendy will spend the full hour of her show doing “Hot Topics” — her fun segment that dissects celebrity news with her witty commentary, of course. And, she won’t be alone! Andy Cohen will join Thursday’s show to co-host alongside her.

Wendy stepped out in her short shorts after she addressed recent paparazzi shots that showed her swollen legs. She recently admitted that she’s been diagnosed with lymphoedema  — a chronic condition that causes swelling, usually in the arms or legs, when someone’s lymphatic system is compromised, according to Mayo Clinic.

However, she’s been treating the condition and promised that she’ll be just fine! “It’s not going to kill me, but I do have a machine — and how dare you talk about the swelling of it all,” she told her studio audience last week.