At first glance, Kate Middleton, 37, and Meghan Markle’s joint-outing at the King Power Royal Charity Polo Day at the Billingbear Polo Club in Wokingham on July 10 appeared to be just two lovely mothers taking their sons – Prince Louis, 1, and baby Archie, 2 mos. – out for a pay date. Yet, as an insider EXCLUSIVELY tells HollywoodLife, this was more than just quality family time between the young British royals. It was also a chance to squash those long-standing rumors of a feud between Meghan, 37, and Kate. “It’s so important to Meghan that Archie bond with his cousins, so spending time with Kate and [Prince William, 37] is a big priority.”

“Whatever differences they might have don’t matter; what matters is their kids and establishing a solid family circle for them,” the royal insider tells HollywoodLife EXCLUSIVELY. “Meghan doesn’t have family, aside from her mom. The rest of [her family] betrayed her, so it’s extra important to her that Archie be close with his cousins and with [Prince] Harry‘s whole family for that matter.”

What about the frequent reports that Kate and Meghan don’t like each other? “It absolutely bothers Meghan that there are these constant rumors about her and Kate not getting along,” the source says. “The rumors have been going around since before the wedding and [Kensington] Palace has tried to shut them down, but it’s not something they can continually address. So Meghan does her best to prove to the public that the rumors are not true.” 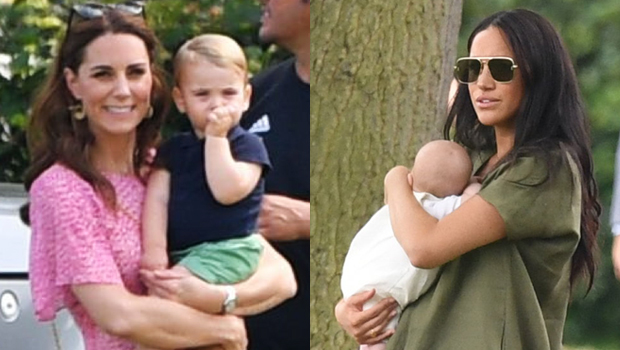 “The best way she can do that is on joint public outings,” the insider added. “Taking their kids to watch Harry and William play polo was a fun day out, and it was a good time for her and Kate to join forces and put on a united front.” So, expect to see Archie spend more time with Prince Louis, 1, Prince George, 5, and Princess Charlotte, 4, in the future.

Meghan can’t catch a break. In addition to these reports of her feuding with Kate, there were rumors that she and BFF Priyanka Chopra, 36, were on the outs. However, the Quantico actress shut those down by raving over her friend in an interview. Maybe when/if she and Nick Jonas, 26, have a kid, they can have their baby go on playdates with Archie to show that they’re a united front, too.