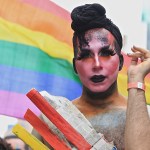 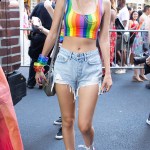 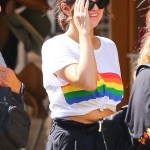 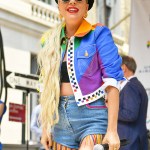 She once sang it takes ‘all kinds of kinds’ of love to make the world go ‘round, and Miranda Lambert backed that up by celebrating Pride in NYC with her husband, her brother, and her friends. Oh, her fans were SO here for this.

“Happy Pride Y’all. #family #ally #worldpridenyc,” Miranda Lambert, 35, posted on June 30. The “All Kinds Of Kinds” singer joined her husband, Brendan McLoughlin, and brother Luke Lambert to celebrate Pride in New York City. Miranda also shared pictures of them attending all the Pride events going on across the city, including one with a fan with a shirt reading, “We should all be Mirandas.” Clearly, her fans think so because they were overjoyed to see her come out and show support for the LGBTQ+ community.

“Girl when I thought I couldn’t love you anymore I see posts like this.” “Miranda Lambert out celebrating Pride!! I love it!!” “Miranda Lambert is celebrating pride in NYC!!!!!!!! love her.” “Thank you for this. I’m a HUGE country fan but also an ally & whenever an artist shows support of the LGBTQ+ community, it warms my heart.” “Thank you for your support, Miranda! I didn’t know & this was a surprise! I KNEW I liked you!” “All these people unfollowing @mirandalambert because she was at pride are morons.” “Miranda Lambert just walked past me in a pride bandana, and my life is now complete.” “As a gay country fan/someone in the industry, this was a lovely surprise from one of my favorite artists/writers. Happy Pride!” “

While some of Miranda’s right-wing fans tsk-tsked her showing support for the LGBTQ+ community, she got some support from her fellow country music stars. “That last pic is so good,” commented Maren Morris, 29, commented, while Little Big Town’s Karen Fairchild, 48, Shane McAnally, 44, left positive comments. Cam, 34, quoted Miranda’s “All Kinds of Kinds” song. “Ever since the beginning, to keep the world spinning, it takes all kinds of kinds,” she wrote. Miranda’s brother, Luke, also left a comment. “Love y’all. Thanks for an amazing weekend.”

NYC Pride brought out all the stars. Pete Davidson, Tommy Dorfman, Pose’s Billy Porter, Wendy Williams, Vanessa Williams, Donatella Versace, Lady Gaga, Alicia Keys, and more attended the celebration. Gaga honored the 50th anniversary of the Stonewall Riots, the event that kicked off the LGBTQ+ rights movement in the United States, by performing in front of the Stonewall Inn. “It is said that those who threw the first brick on that historic night were members of the trans community,” she said, per HuffPost. “And while we have made tremendous progress, we find ourselves also at a time where attacks on the trans community are on an increasing rise each day. I will not tolerate this.” Now, that’s being a #ally.