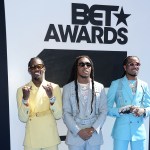 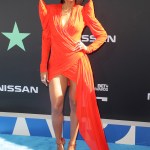 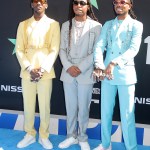 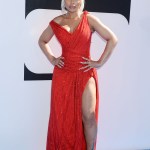 La La Anthony turned up to the 2019 BET Awards with her 12-year-old son on her arm, who looked all grown up at the awards show!

La La Anthony, 35, may have left her husband at home during the 2019 BET Awards, but she was still sure to bring a date! The star proudly took their son, Kiyan Carmelo Anthony, 12, on her arm to the annual awards show. The mother-son duo showed up to the big show with beaming smiles and were sure to pose for a series of sweet snapshots. At just 12-years-old, Kiyan looked like a bonafide star himself! La La and Carmelo Anthony’s son looked so stylish as he hit the carpet in a printed denim ensemble and a pair of super cool sneakers.

Meanwhile, mom La La looked drop-dead-gorgeous per usual. The famed television host wore a sheer, black and gold mini-dress that perfectly showed off her curves. The stunner brought some major glamour to the awards show thanks to the dress, which she completed with sleek, pointed-toed heels. She wore a natural beauty look with brown eyeshadow and nude lip, and tossed her hair up in a high pony. Low maintenance but so chic!

The mother of one recently opened up about why she won’t be having more children. The 35-year-old told Us Weekly ar the American Apparel & Footwear Association’s American Image Awards recently that “I think I’m done.” She went on to explain that Kiyan was everything she can Carmelo could have asked for! “My son has fulfilled me in every single possible way,” she said, “so I think I’m done, yes.”

How sweet is this! We love that La La decided to take her son as her date to the BET Awards. It’s hard to believe how fast he has grown up, but he looks so dapper here!