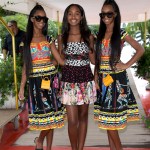 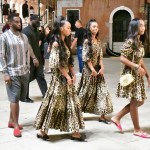 Baby Phat is making a comeback, and the ads for the new collection feature two adorable models — D’Lila and Jessie Combs, the 12-year-old twin daughters of Diddy and the later Kim Porter.

D’Lila Star and Jessie James Combs are ready to take the modeling world by storm! The girls have been growing up right before our eyes, and now, they’re modeling for Kimora Lee Simmons’ new Baby Phat collection at Forever 21! In a new video to promote the brand, D’Lila and Jessie can be seen holding hands while rollerskating, and one of them even blows a sweet kiss to the camera. They’re joined in the commercial by Kimora herself, along with two of Kimora’s daughters and a bevy of other models. The group is also featured in a photo ad for the collection, with D’Lila and Jessie rockin’ white t-shirts, black biker shorts and knee-high pink socks.

We can only imagine how proud the girls’ father, Diddy, is of this huge career opportunity they’ve gotten. It’s been such a tough year for the twins, as their mom, Kim Porter, passed away from pneumonia at the age of 47 last November. However D’Lila and Jessie have been extremely resilient, and Diddy even credited them with helping him get through the loss (the rapper and Kim split in 2007, but remained amicable as they co-parented their children over the years). “They said that, in a weird way, their mother taught them out to deal with death,” Diddy admitted in an Essence interview earlier this year. “[Kim’s mother] passed away [four years ago], so the girls saw their mother deal with losing her mother. Now, ironically, they are teaching me how to deal with Kim’s passing.”

In the same interview, he also revealed that Kim made sure to ask him to “take care” of all her children before she died. D’Lila and Jessie are the only biological children that she shares with Diddy, but he adopted her son,Quincy, from a previous relationship, while they were together.

It’s unclear how involved D’Lila and Jessie will be with future marketing for Baby Phat, but we loved seeing them in this ad! The brand was founded by Kimora in 1998. In 2010, she announced she was leaving her position as president and creative director. The brand was brought back in 2019 as part of Forever 21’s capsule collection.