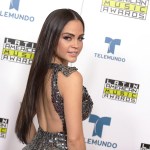 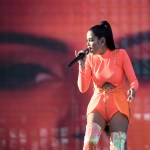 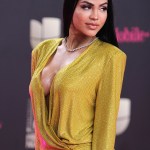 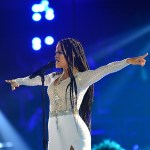 After a very public flirt fest with Rob Kardashian, everyone has taken notice of pop-reggaeton singer Natti Natasha. Here’s everything to know about the songstress who has caught the Kardashian’s eye.

Love is in the air, or well, the Twittersphere. Rob Kardashian, 32, and pop-reggaeton singer Natti Natasha, 32, shared a very public flirt fest this week and all corners of the internet have taken notice. The two stars caused quite the commotion with their flirtatious back and forth after Rob shared a steamy photo of Natti to his own page with the words “Oh hi.” Natti made sure the internet knew this was no one-sided love affair, and retweeted a different post from the Kardashian with the words “My Rob.” As fans continue to scratch their heads over the out-of-the-blue love affair, here’s everything to know about the popular singer who has amassed more than 14 million Instagram followers.

1. She’s the most-watched woman on YouTube. Natti is racking up some major views on the video platform. She garnered more than 4.52 billion views on her videos in 2018 alone, beating out the likes of Ariana Grande and Taylor Swift. No big deal!

2. She has some impressive collaborations under the belt. Natti has previously collaborated with the likes of Becky G, Bad Bunny and Enrique Iglesias. Her December, 2018 single “Me Gusta” was cowritten by Latin music icon Daddy Yankee.

3. She’s been honored with numerous accolades. The Dominican diva was the most nominated artist of the night at the 2019 Premio Lo Nuestro awards, where she took home four awards. She also won the Hot Latin Songs Artist of the Year, Female, award at the 2019 Billboard Latin Music Awards.

4. She’s proud of her Latin roots. The songstress was born in Santiago de los Caballeros in the Dominican Republic. She started out singing in church as a small child, and after her mother took notice of her talents, she enrolled her in the School of Fine Arts of Santiago at age eight.

5. Don Omar took her under his wing early on in her career. The Puerto Rican Reggaeton singer served as the ultimate mentor for Natti. After one of Don’s talent scouts caught wind of Natti’s band D’style, which she formed with friends, she wound up in New York City to work with him at his studio. The two eventually recorded a duet single “Dutty Love,” in 2012.