“The Jonas ladies have been supporting their men so much lately, and last night at Wango Tango was no exception,” a eyewitness shares EXCLUSIVELY with HollywoodLife, after the Jonas Brothers – Kevin Jonas, 31, Joe Jonas, 29, and Nick Jonas, 26 – returned to the iHeartRadio Wango Tango stage for the first time in over a decade. A lot has changed since the Jonas Brothers were last at Wango Tango – specifically, they’ve all gotten married! Two of their wives were on hand to see the Jonas Brothers’ epic return to the iHeartRadio event. “Priyanka [Chopra, 36] arrived solo in the Maybach husband Nick gifted her looking amazing in a yellow dress,” the eyewitness says. “She went immediately backstage where the guys were as well as fellow Jonas wife, Danielle [Jonas, 32].”

What about Joe Jonas’s better half? “Sophie [Turner, 23] couldn’t make it,” the source tells HollywoodLife, ”but the girls chatted and caught up while the guys were busy doing their thing. They had a lot of obligations with fans and press, and the girls hung out. Priyanka held hands and packed on the PDA with Nick as Danielle and Kevin held hands, as well. Joe was bouncing around and smiling since he was solo, but it didn’t seem to be bothering him.

“The girls led their men to the stage and watched and cheered them on from a tunnel and totally fangirled out. You can tell they are so proud of them and so in love,” the eyewitness added. While Sophie missed out on this set at Wango Tango, the source notes that all Jonas women “will be on tour as much as they can” when the three brothers hit the road this summer. Danielle, Sophie, and Priyanka are “really happy for the guys that they’re reunited and doing what they love. It’s definitely brought everyone in the family closer together.” 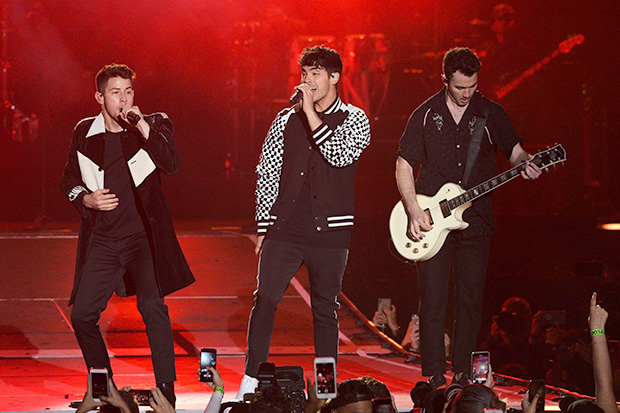 The last time the Jonas Brothers played the iHeartRadio Wango Tango festival, it was back in 2008. The brothers returned in full force, giving fans a set of favorites from their previous albums while peppering the set with songs from their upcoming album, Happiness Begins. The set featured “Burning Up,” “That’s Just The Way We Roll,” the new song, “Cool,” “Lovebug,” and “Year 3000.” They closed the set out with “Sucker,” and for those feeling FOMO over Wango Tango, don’t fret. The “Happiness Begins Tour” kicks off on Aug. 7 and hits all the major US/Canada cities.