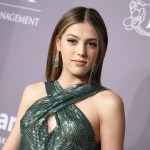 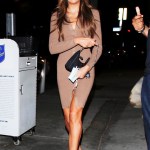 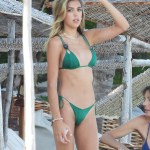 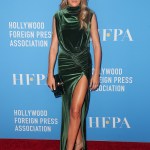 Summer came early for Sistine Stallone, as the gorgeous 20-year-old daughter of Sylvester Stallone decided to catch some rays in a white bikini along with her baby boy — her dog.

There’s no stronger bond than between a girl and her dog. “My son, Ace,” Sistine Stallone, 20, captioned a May 4 shot of her. The Instagram Picture showed Sylvester Stallone’s daughter lounging on some grass. Asleep in her lap is her “son,” a very chunky-looking Doberman. For some, seeing such a good boy napping is the highlight of this pic. For others, it’s seeing the Rambo: Last Blood star’s daughter show off her fantastic figure while in a white bikini. Either way, the picture is a winner and a great way to kick off the summer.

Perhaps Sistine wanted to get a beautiful golden glow before she headed off to the French Riviera? Sly’s daughter made a splash at the 2019 Cannes Film Festival. Her father received a special career tribute, and during the May 24 event, Sistine stepped out on the red carpet in a gold dress that made her look like she was drizzled in 24-karats. The 47 Meters Down: Uncaged star’s outfit hugged every inch of her form and had a very deep, plunging neckline. 47 Meters Down, indeed.

Two days later, Sistine joined her parents – Sylvester, 72, and Jennifer Flavin, 50 – for a special screening of The Specials at the Cannes closing ceremony. Sistine wore a strapless ivory sequined gown and had some of her wavy locks pulled back, showcasing her unparalleled beauty. The former Miss Golden Globe – a title she shared with her sisters, Sophia, 22, and Scarlet, 17, in 2017 – looked stunning during the event. With her own movie career starting with 47 Meters Down: Uncaged, Sistine has plenty more Cannes appearances in her future.

Sistine and Corinne Foxx will team up for the sequel to 20017’s 47 Meters Down, which starred Claire Holt and Mandy Moore. The first movie was a surprise smash hit, as it grossed $61 million. While that pales in comparison to the business Avengers: Endgame, John Wick 3 and Aladdin are pulling in at the box office, keep in mind: 47 Meters Down made $61 million on a $5 million budget. This time around, the sequel follows four women exploring an ancient Mayan city lying under the ocean that is now populated completely by sharks, according to Collider. “As they swim deeper into the claustrophobic labyrinth of caves they enter the territory of the deadliest shark species in the ocean,” the press release accompanying the trailer reads. The film drops on Aug. 16, during the tail-end of summer (or prime bikini weather, if you’re Sistine.)