Wendy Williams, 54, and her 19-year-old son, Kevin Jr. continue to put on a united front, despite making headlines this week for their tumultuous family drama involving her estranged husband, Kevin Sr. The daytime talk show host and Kevin Jr., who is a freshman in college, walked the streets of Washington D.C. hand in hand on Thursday. The mother-son pair were accompanied by a body guard, who sheltered them from the rain with a large umbrella. — See the new photos, below!

The newly single host teased her trip to D.C. during her show on Wednesday. “I’m going to a black tie gala with the boy,” she told her studio audience, who she refers to as her “co-hosts.” Wendy also hinted at their gala looks. “He’ll be in a suit,” she said of her son’s ensemble, adding that she would be wearing a gown. It’s unclear what the gala is in celebration of, however, she promised her viewers that she would fill them in when upon her return to New York.

Wendy has been quite busy while news of her family drama continues to dominate headlines. The former radio queen took a quick trip to Chicago with her son on Tuesday, May 21 — the same day he was arrested for an altercation in West Orange, NJ. The two attended Wendy’s scheduled appearance at an event for her partnership with Snack Pop’s Candy Pop and Cookie Pop, as well as the addition of Pasta Snacks. A source at the charity event noted that Wendy, who looked “amazing,” appeared to be in great spirits as fans greeted her with loud and loving cheers. 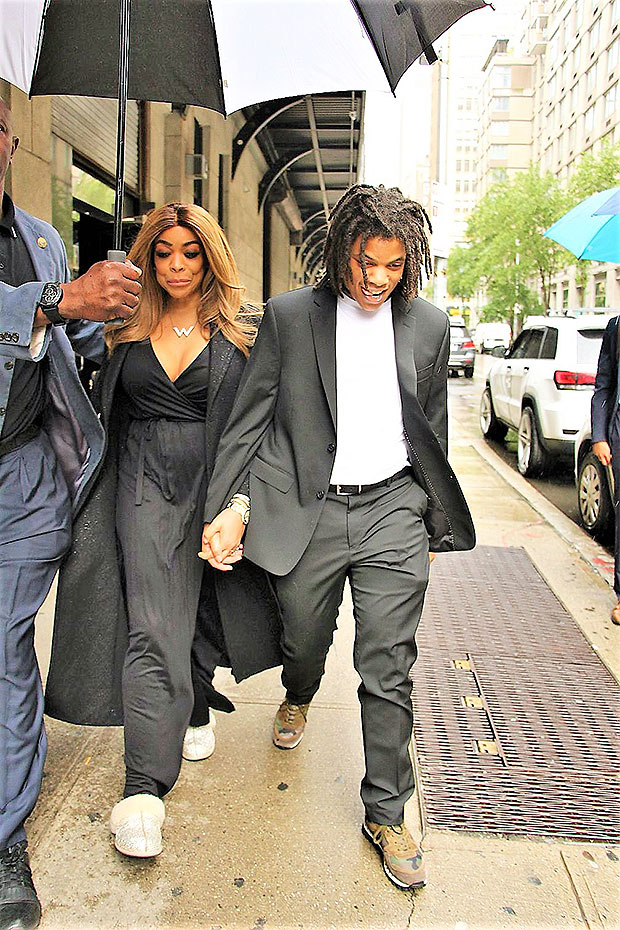 Wendy Williams and her son, Kevin Jr. hold hands while out in Washington D.C. on Thursday May 23, 2019. (Photo credit: KAT/MEGA)

Kevin Jr. has had no trouble stepping out in public following his arrest. If you haven’t followed the situation, police were called after the college student got into an alleged altercation with his father, Kevin Sr. on the night of May 21. A representative from the Essex County Prosecutor‘s Office told HollywoodLife the following: “I can confirm that Kevin Hunter Jr. was arrested on May 21 in West Orange, NJ. There is an ongoing investigation and right now he’s charged with simple assault. At this point the matter is in the family court, but those proceedings are not open to the public.”

Following the incident, Kevin Sr. released the following statement: “I love my son very much and I will not be pursuing this matter legally,” the producer told TMZ, which was first to report the news. “Things are not always how they appear,” he added.

Wendy’s family drama began in early April when she filed for divorce from Kevin Sr. She served him with divorce documents on April 10. The couple was married for nearly 22 years, and Kevin Jr. is their only child together. Since the filing, Wendy has opened up about how she is loving her new single life and said that she is “dating, often.”

The host is now living in an apartment in New York City, which she calls her, “bachelorette pad”, with her son. The family previously shared a home in New Jersey together. Wendy filed for divorce just weeks after she announced on her show that she had been living in a sober home for addiction in Queens, NY for a portion of February and March.