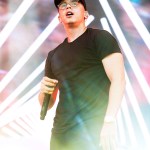 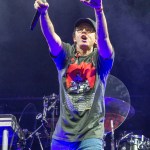 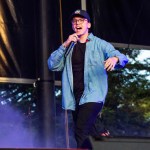 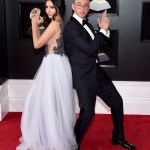 After spending years dissing each other, Joyner Lucas and Logic have finally settled their differences in order to come together for an epic ‘banger,’ and fans are SO hyped over it.

“Peace, Love & Positivity,” Logic, 29, tweeted on May 23, right after “ISIS (ADHD),” his collaboration with his once-foe, Joyner Lucas, 30, hit the internet. The rappers, whose long-standing beef came to a head in 2018, apparently found a way to bury the hatchet long enough to put together a song that left fans wanting more. In the music video for “ISIS (ADHD),” which Genius notes ADHD is the title of Joyner’s upcoming album, both Logic and Joyner portray soldiers with a captured ISIS terrorist. Just as the duo unmask the captured ISIS member – surprise! It was Logic all along.

Despite all the violent imagery – tanks, Humvees, and more military-grade weapons than a Pentagon yard-sale – fans were more amazed at the peace made between these two former enemies. “So Joyner and Logic don’t have beef anymore?” one fan tweeted in amazement. “Logic n Joyner dropping a joint project is the best thing to happen to music yep” “Are YOU KIDDING ME. How in God’s name can Joyner and Logic squash beef with nearly the same level of hype as when Pusha started one? BRUH” “I’m on Instagram just scrolling then out of nowhere I see Joyner Lucas and Logic on a track together. Like out of nowhere. I didn’t even think it was real until I went to YouTube. Love to see brothas making PEACE!” “I F*CKING NEEDED THIS! JOYNER AND LOGIC SQUASHED THE BEEF!!!!

Logic even worked his feud with Joyner into his guest verse, as he interpolated the lyrics from “What’s Beef?”, a cut from The Notorious B.I.G.’s Life After Death album. “What’s beef? / Beef is when you murder mother*ckers on a beat, kill ‘em all, kill ’em all / Nah, nah, what’s beef? / Beef is brothers hangin’ over shit that never mattered in the first place, lyin’ in the street / What’s peace? / Peace is when you leave it in the past, let it heal like a cast/ When enough time pass, and you blast.”

Joyner Lucas & Logic squashing their beef and dropping a song is exactly what I needed today.

Logic and Joyner’s beef started back in 2016, according to Genius, on Tech N9ne’s speed rap song, “Sriracha.” It was supposed to only feature Logic, but when he kept Tech waiting, the rapper recruited Joyner to spit a few bars. When Logic’s verse finally showed up, it was at a much slower flow, which offended both Joyner and Tech N9ne. Joyner – whose manager met with Logic’s manager – also accused Logic of stealing his idea to name his massive hit “1-800-273-8255.”

It came to a head in 2018. Joyner first seemingly dissed Logic’s song “44 More” and Everybody album on his “Look Alive” freestyle (“44 shots traumatizin’ from the .45, hit 44 more / Carbon copies say you kamikazes / That’s for e’rybody”) while Logic seemingly fired back on his track “Yuck” (“Peace, love, and positivity, that’s all I want with you / But you push the issue ’cause I give you more press than your publicist could ever get you”) While Logic didn’t mention Joyner’s name, his rival wasn’t so subtle on “Mask On,” his remix of Future’s “Mask Off” (“And don’t you compare me to Logic (never) / Go listen to Sriracha / Yeah, that’s Amanda to Ronda / And that’s a Benz to a Honda”) Despite all this, it seems these two finally chilled out and settled their differences.