When Meghan Markle, 37, and Prince Harry, 34, revealed the name of their son, many were curious as to why they christened their firstborn Archie Harrison Mountbatten-Windsor. The choice left some royalists shocked, as it’s not one of the more traditional picks. Yet, it appears there’s a “major” significance behind Archie’s name…in The Sun claims he’s named after Major Tom Archer-Burton, 41. “It’s well known in Army circles, and Archie’s inner circle, that baby Archie is a nod to him,” a source told the publication, though Kensington Palace told HollywoodLife.com that this is not the case. “The Duke and Duchess picked Archie because it’s a name they like.” As the world celebrates the latest addition to the British royal family, here’s what you need to know about Archie’s reported namesake.

1. He’s Prince Harry’s mentor in the armed forces. Harry — following the footsteps of his father, Prince Charles, 70, and older brother, Prince William, 36 – underwent officer training at the Royal Military Academy Sandhurst in May 2005. Known as “Officer Cadet Wales,” Harry would be commissioned as a second lieutenant in the Blues and Royals (he would attain the rank of lieutenant in 2008.) It was at Sandhurst where Harry first developed his close relationship with Tom Archer-Burton. “Archer-Burton is the only man capable of telling Lt Wales to do press-ups or stand on one leg for as long as he feels necessary,” a commentator said at the time, per The Sun.

2. Major Tom made Harry’s wish come true – by getting him deployed to Afghanistan. In 2007, Harry was “horrified” to learn that he would not join his fellow soldiers for a six-month tour of Afghanistan, according to The Sun. Harry threatened to quit the army, but it was Tom who convinced him to say on. “It was a very low point in [Harry’s] life because he felt as though everything he’d trained for had been a waste of time,” Sun Royal Editor Duncan Larcombe said.

“Archie convinced Harry to stay in the Army, and I’m delighted that Harry has named his son after someone who played such an important role in his life,” Duncan said. Harry would serve alongside his fellow military members, as Tom would secure a deal that kept Harry’s 2008 deployment out of the media. Harry served for ten weeks in Afghanistan, the first member of the Royal Family to serve in a war zone since his uncle, Prince Andrew, flew helicopters in the Falklands War in 1982. 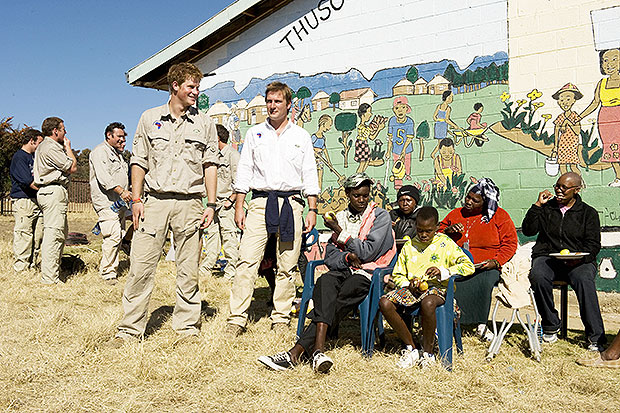 3. Major Archer-Burton is a family man. Tom might be able to help Harry out again by offering some parenting advice. The officer is a father of three.

4. He’s a man of faith. Major Tom Archer-Burton was awarded a Long Service & Good Conduct Medal last year. It was in June 2018 that he cycled 120km through Kenya on a trip to raise money for charity. Charitable works are part of his character, as The Sun reports he’s a devoted Christian.

5. He’s Harry’s best friend. “The two men have stayed in regular contact, and Archie has met most of Harry’s family, including Meghan,” the source told The Sun. It’s true – Tom accompanied Harry on a school-building charity mission in Africa in 2011.

“The Harry we see today is so different from the angry, frustrated royal we could have seen had it not been for an officer who calmed him down at a point in his life when he could well have given up on his military career,” The Sun’s Royal Editor states.