Diamonds are Bella Hadid‘s best accessory, along with Jeremy Scott! The model wore a Moschino number to the Met Gala in New York with the designer as her red carpet companion. Her tight black dress featured revealing cutouts that were lined with multi-colored, chunky diamonds.

Bella took old Hollywood glam to a whole new level on Monday night. She rocked a short pixie cut with a side-part, like Kris Jenner, who swapped out her usual do’ for a sleek, blonde bob. Bella took this year’s theme — “Camp: Notes on Fashion” (another term for being “extra”) — and made it her own with her classy dress. See her full look below!

It’s no surprise that Bella aced this year’s “Camp” theme. The model was spotted out in New York City, ahead of the ball, where she appeared to be practicing tonight’s wild dress code. Bella was spotted uptown where she prepared for the big night at the prestigious Mark Hotel. She was photographed wearing a head-to-toe, all-white ensemble, which included, sneakers, high socks, spandex leggings, a button-down shirt, and a laser-cut leather waist belt by Alaia. 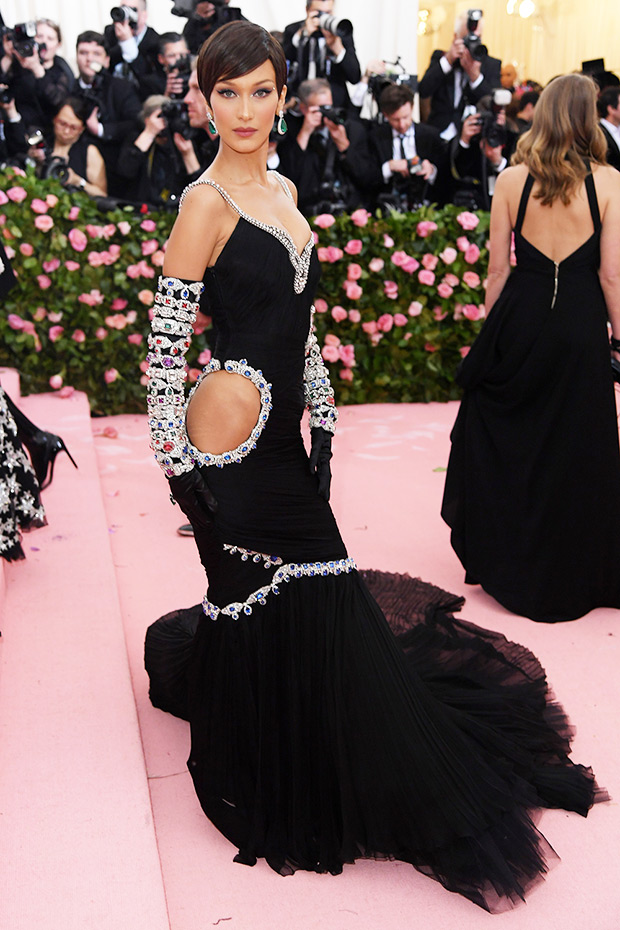 Bella Hadid wears Moschino by Jeremy Scott at the Met Gala at the Metropolitan Museum of Art in New York City on Monday, May 6, 2019. (Photo credit: Shutterstock)

This marks the model’s fifth year attending the Met Gala. And, she’s worn black each year, so, this year’s “Camp” ensemble was quite similar to her past looks. During her Met debut, Bella donned Topshop for the annual charity event. The next year, when she attended the ball with her boyfriend, The Weeknd, she showed up in Versace. The next year, Bella wore an unforgettable mesh catsuit by Alexander Wang. dominatrix-inspired look for the Catholic themed party.

While the model had her arm candy at this year’s Met, she attended the ball solo in 2018. Bella nailed the theme of “Catholic Imagination” last year, when she opted for a darker red carpet look then other stars, who wore lighter, angelic pieces. Her dominatrix-inspired look included a floor-length black, sheer veil with a gold trim; a black latex top; a leather jacket with an exaggerated; arched collar and fingerless gloves. Bella wore her hair up and slicked back with two gold hair accessories. She wore a gold cross necklace that matched her gold nails and her eye makeup.