Kris Jenner is living her best life, as she should be. The KarJenner matriarch and ultimate boss lady graced the Met Gala red carpet in an exotic look, right on theme with Camp! The momager rocked an angled blonde bob in the pink carpet, that was reminiscent of Kylie Jenner‘s blunt bob at the 2017 Met Gala! “A couple hours ago, Kylie decided I should be blonde!” Kris told E! on the carpet. Kris wore a Tommy Hilfiger navy jumpsuit with a sweetheart neckline, tied together with a sparkling star broach — bringing in the EXTRA in Camp!

“My advice to any going to Met Gala in the future is to wear pants because I am so comfortable!” Kris told E! “I’m channeling David Bowie, so fun.” She accessorized with a long tulle jacket that featured accentuated shoulders. Last year, Kris Jenner was the ultimate mom at the Met Gala, taking photos of her daughters Kim Kardashian and Kylie and Kendall Jenner from the top of the Met stairs. This year, she did the same, watching as her daughters walked the carpet, looking on like a proud mama! Earlier this week, Kris came to Kylie’s defense after haters claimed the youngest Jenner sis isn’t really a ‘self-made’ billionaire, as Forbes put it. “I think she’s self-made,” the momager said on CBS Sunday Morning. 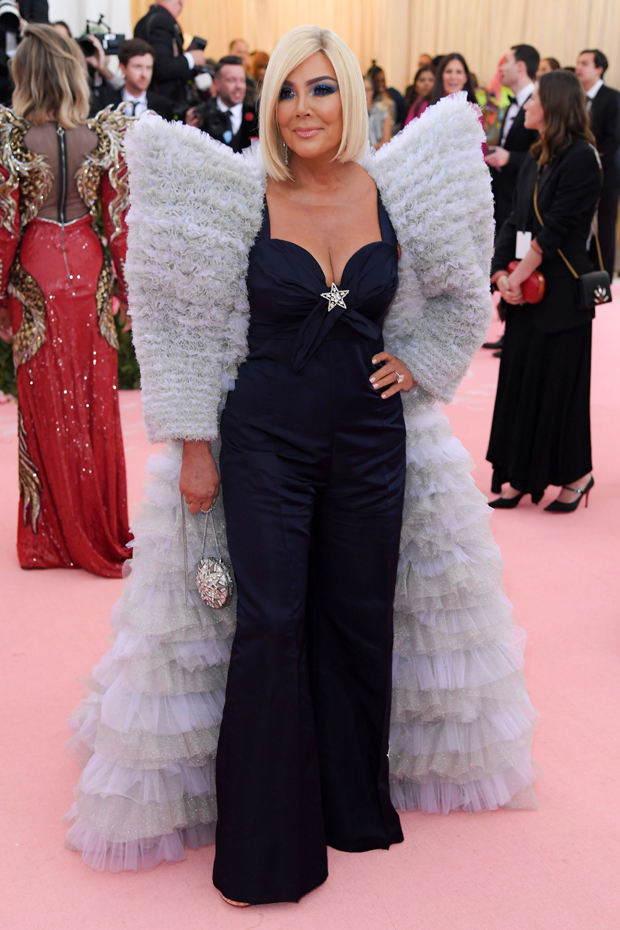 “I mean, listen, my girls, you can say that certain things have been handed to them, but it takes a lot of work to do what they’re doing,” adding that while she may have a large platform because of her name, “the money she’s made is her own.” Kris continued, “She put her own blood, sweat and tears into it. It was her idea. It was amazing what she did.” The 63-year-old said that Kylie’s success actually taught the whole family about business and everyone took note.