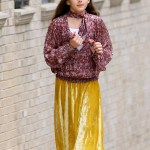 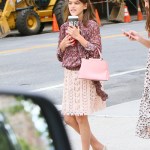 Suri Cruise & her mom Katie Holmes took the trip of a lifetime this week, but in pics from their time in Greece it’s hard not to notice that Suri is looking more like her famous dad with each passing day!

Like father like daughter? Suri Cruise jet set across the globe for a humanitarian trip with her mom, Katie Holmes, 40, this week, but in photos from the trip her resemblance to dad, Tom Cruise, 56, was unmistakable. The 12-year-old daughter of the two actors was snapped at the airport on March 23, and looked more like her dad than ever. Suri wore a white knit sweater as she walked through Athens International Airport, and a pair of pink patterned pants. She also donned a pink scarf around her neck as she readied to return home. However, there’s no doubt Katie’s humanitarian sidekick seems to be resembling her dad more and more!

The mother-daughter duo seemed to be in good spirits as they arrived to the airport, after their whirlwind trip to Greece. The two chose to visit Moria, a Syrian refugee camp. They spent time volunteering with young women and children at the camp over the course of several days, and the photos from their visit were so sweet. In one snapshot, Katie was seen sitting with a toddler-aged little girl in her lap. In another, she was seen helping paint a mural with helping hands from some of the children. “I am so grateful for this experience of working with and getting to know these incredible women in #moriarefugeecamp their hearts are so kind ❤️” she captioned the post.

The sweetest memory of all from the trip might have been the photo of Suri playing patty cake with one of the children from the camp. Katie shared a black and white photo depicting the moment, and her daughter had the biggest smile on her face as she played with the young child. See the touching photo below!

There’s no doubt that Katie has made an enormous difference with her humanitarian efforts and her daughter is definitely following in her footsteps. The 12-year-old is getting bigger every day and has an even bigger heart!