Angelina Jolie gave fans a rare treat while attending a movie premiere by wearing a dress that showed off all the tattoos on her back. They just don’t look cool — there is a significant meaning behind each one.

Angelina Jolie, 43, looked stunning as she escorted four of her six children — Zahara, 14, Shiloh, 12, and 10-year-old twins Vivienne and Knox — down the red carpet at the El Capitan Theater in Los Angeles on March 11. The family was there to celebrate the premiere of Tim Burton‘s Dumbo remake, and they looked so happy together. Angie, in particular, looked fabulous in the white dress she wore to the event, but what really caught everyone’s eyes was the outfit’s open back. Why? This exposed skin gave onlookers a rare glimpse at the extensive designs she’s had tattooed over the years. At first glance, the tattoos are impressive because they look so crisp and clean. However, when you learn the meaning behind them, they become even more amazing.

Near Angelina’s left shoulder blade is a Buddhist incantation, one dedicated to her son, Maddox. In the center of her back is a Buddhist temple design, one that reminds the wearer to have mercy on oneself and others. In the center of her back, she has a grid design that represents the four continents and the four elements – earth, wind, fire, and air. Around her right shoulder blade, Angie has a Buddhist mantra, one that is said to bring luck and wealth.

A former Thai monk tattooed this particular design while Angie was in Cambodia back in 2016, according to Daily Mail. Speaking of Cambodia, the Bengal tiger head she has inked on her lower back celebrates her Cambodian citizenship and was blessed by the tattoo artist who “chanted a hymn” as he applied it, per the Mail. Yes, Angelina Jolie has a blessed tattoo. 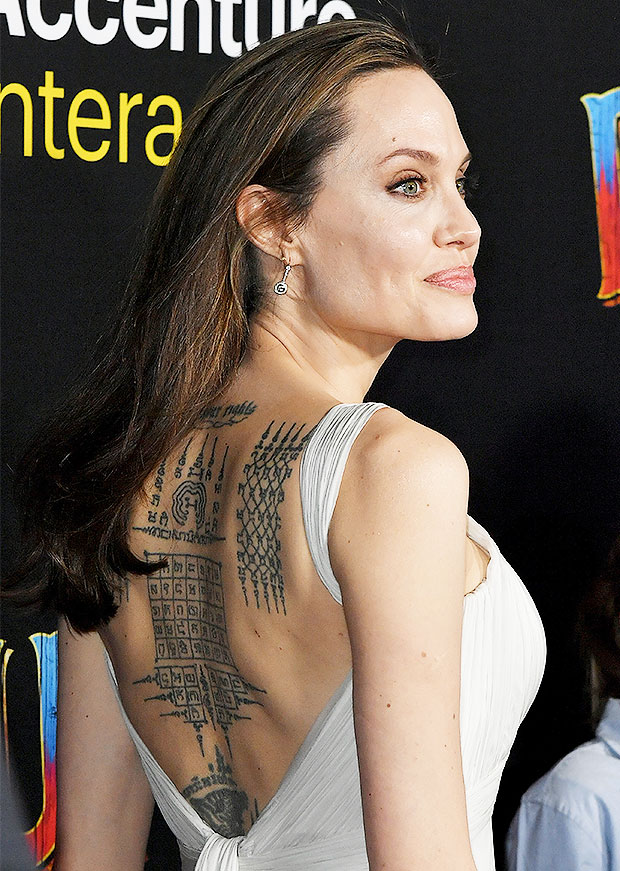 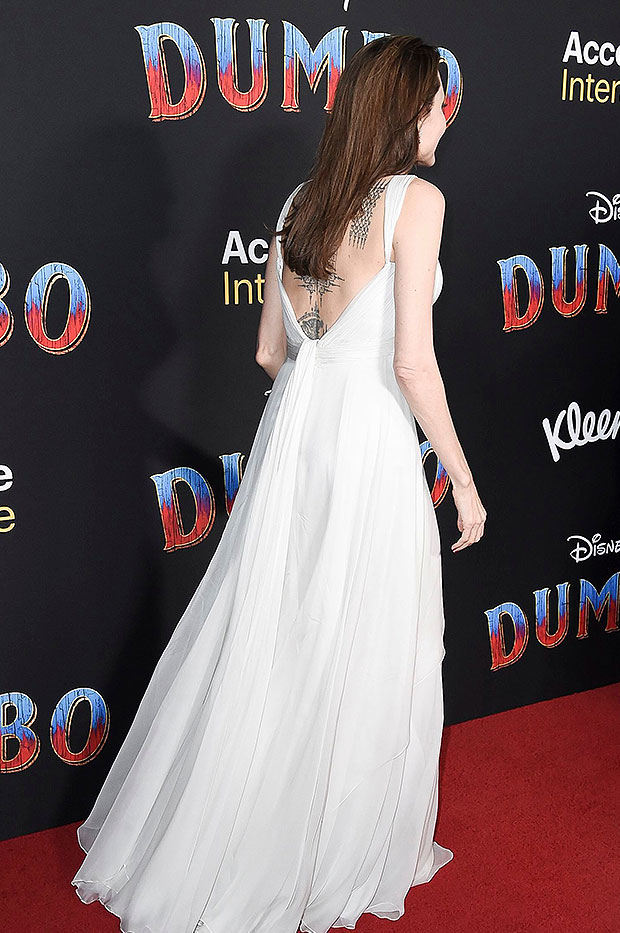 The tattoo Angie has at the top of her back may not be Buddhist in origin, but it’s no less spiritual. “Know Your Rights,” the ink reads in gothic lettering, and it’s a reference to The Clash’s song of the same name. In addition to this tribute to the late Joe Strummer, she has ink commemorating the loves of her life: on her left upper arm, she has the coordinates of all the locations where her children were born.

This design replaced the name of her ex-husband, Billy Bob Thornton, as she had that removed by lasers. Angie added the location of Brad Pitt’s birth to the design in 2011. Will she replace that? Only time will tell.

It has been relatively quiet on the Brangelina front since the two hashed out a custody agreement (save for that one moment when they were spotted having a tense conversation.) Mostly, Angelina has been spending quality time with her kids, taking them on trips to watch movies in NYC, or out for sushi in LA. As these kids are living their best lives, a source EXCLUSIVELY told HollywoodLife.com that Brad wishes she’d lay off on the extravagant trips. “He wishes Angie would stop buying the kids stuff they don’t need. He worries the kids are growing up spoiled.”