Brad Pitt was all smiles while out in Paris on March 11! The actor let his long hair down when he was spotted with his usual grey cap on in new photos. The sighting marked the first time Brad has been seen since he attended his ex, Jennifer Aniston’s birthday party in Feb.

Brad Pitt, 55, looked happy to arrive in Paris on March 11. The Once Upon A Time In Hollywood actor was all smiles as he arrived at Paris Charles de Gaulle airport in France on Monday. He kept things casual in a dark peacoat with a popped collar and tinted shades. Brad showed off his long locks under his signature grey cap that he’s been spotted wearing on numerous occasions.

The actor was greeted by a few people as he arrived in Paris with a small bag on his shoulder. He was photographed shaking a few hands before he hopped in a waiting car. This was the first time Brad was photographed out and about since he attended his ex, Jennifer Aniston‘s 50th birthday party in Beverly Hills on February 9. He also sported his long locks and grey cap to Jen’s big bash.

Brad’s salt and pepper look, including his newbeard came after his tumultuous split with Angelina Jolie. The actress filed for divorce in September 2016, and the two are still in a custody battle over their six children — Maddox, 16, Pax, 15, Zahara, 14, Shiloh, 12, and 10-year-old twins Vivienne and Knox. Brad’s post-breakup look has presumably worked well for him, as the actor has been rumored to be back in the dating scene after laying low for most of 2017 and 2018. Not to mention, he’s been fully immersed in his work. 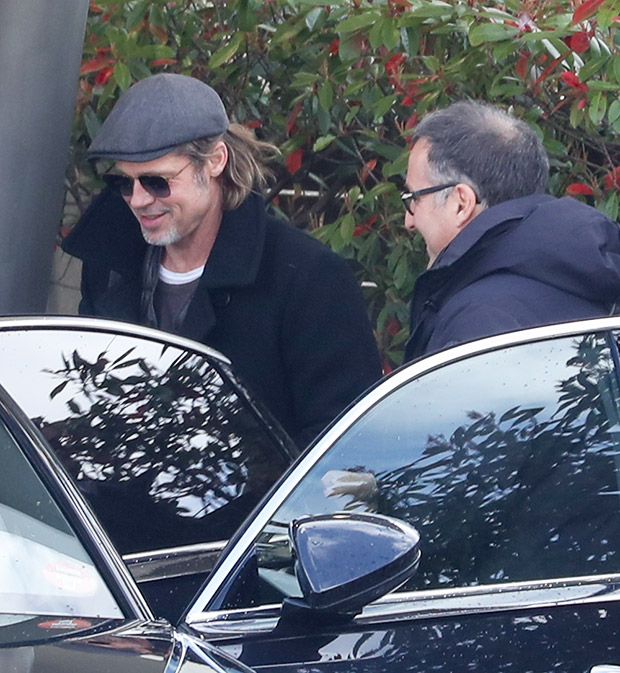 Brad just wrapped filming on his forthcoming film, Once Upon A Time In Hollywood, which stars big names including, Leonardo DiCaprio and Margot Robbie. His production company, Plan B managed to stack a slew of awards show nominations for films including, Beautiful Boy, Vice, and If Beale Street Could Talk.