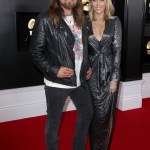 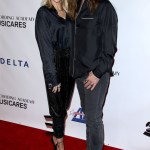 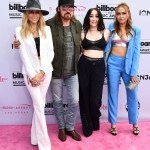 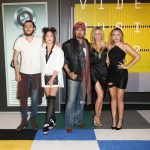 Miley Cyrus has been open about her weed-smoking habits for years, and now it seems like her mom, Tish Cyrus, is jumping on the bandwagon, and Billy Ray is here for it!

Tish Cyrus is far from breaking Billy Ray Cyrus‘s achy-breaky-heart! Miley Cyrus‘s mom posed in front of a locker filled with bags of marijuana and Billy Ray took to Twitter to share the pic and his love for it! “Yes! Like I said yesterday @TishCyrus…. my how the times they are a changing #CrAzYMaMa,” the country crooner captioned the photo. In the tweet, Billy Ray was referring to the Valentine’s Day bouquet he gifted his wife of 25 years, which was filled with gorgeous greens and… weed! “What? And I had to be a closet smoker for 40 years? Once had to buy @TishCyrus a car just because she smelled it on me,” he wrote under the photo of Tish holding the bouquet that had a sweet note on it. “Try not to smoke it all in one sitting,” it read, in part. LOL!

Miley’s rents then enjoyed themselves to a feature of their son-in-law, Liam Hemsworth‘s new movie Isn’t It Romantic?, which came out just in time for the holiday of love! “2 thumbs up #isntitromantic @Liamhemsworth Laugh out loud funny!!!!! Great work cast and crew!” Billy  Ray complimented in a post on his social media. “Did we laugh a lot or what @TishCyrus,” he wrote in another post, with a pic of Tish standing in front of the poster for the film. Are they the cutest in-laws or what?!

Yes! Like I said yesterday @TishCyrus…. my how the times they are a changing #CrAzYMaMa pic.twitter.com/tfvbGYC0Oc

Miley also took to IG to show her love for her mama, in several different pictures with her gorgeous bouquet. The “Nothin’ Breaks Like a Heart” singer shared a picture of her bouquet on her head, in her mouth like she was smoking it and near her crotch like a metaphorical penis. In the final pic, she bit a flower while posing with her mom, writing, “My mama told me this bouquet is for holding and traditions sake…. not eating …. or smoking….. or using as a metaphorical “penis” / unicorn horn but …. I did it anyway. Sorry mom.” LOL. We love the Cyrus’s!