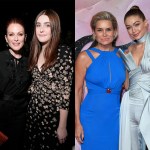 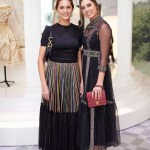 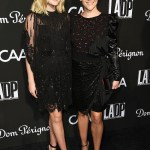 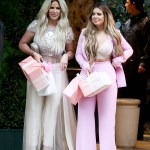 Yasmin Le Bon stepped out with her look-alike 29-year-old daughter, Amber, on Jan. 29, to celebrate a Christian Dior exhibition in London, and her stunning beauty proved she looks half her age!

Yasmin Le Bon, 54, was a gorgeous sight to see when she showed up with her beautiful look-alike daughter, Amber, 29, at London’s Victoria and Albert Museum to attend a gala celebrating the Christian Dior: Designer of Dreams exhibition. In a side by side pic from 1990 and today, which you can see below, the model and wife of Duran Duran lead singer, Simon Le Bon, 60, proved she still has the same beauty that she had almost 30 years ago, and we can’t get over it! If we didn’t know better, she could have easily been mistaken for Amber’s sister, and with a 25 year difference between them, that’s impressive.

The mother and daughter both flaunted their beauty in black gowns with accents of colorful designs for the event, and they had their hair back in similar hairstyles, showing off their fresh and flawless faces. They also wore pointed heels and natural looking makeup.

In addition to the fun night out with Amber, Yasmin took part in another celebration on Dec. 27. The post-Christmas date marked the 33 year marriage anniversary for her and Simon. The couple have three daughters together, including Amber, Saffron, 27, and Tallulah, 24, and their bond seems to be stronger than ever.

Although Yasmin’s strong marriage and close-knit family gives her a lot to be thankful for, the mother recently opened up to Red Magazine about her struggles with menopause. “The menopause is a bit s**t, actually,” she told the publication. “You ache all over, you’re tired and fractious and you develop a layer of padding all over. You can’t remember to make that appointment to see the damn endocrinologist. You can’t remember where you parked the car. It’s important that you tell people this. I share this with my girls because I want them to be a bit more prepared than I was.”

It’s great to know that Yasmin may be one of the most beautiful women in the world, yet she’s willing to be open and honest about the tough parts of life!