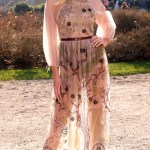 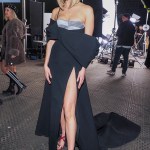 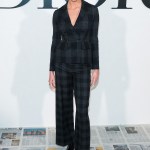 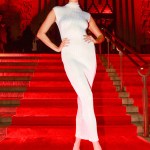 Karlie Kloss can slay all day! While the newly-minted Mrs. Joshua Kushner, 26, isn’t walking at Paris Fashion Week, she still started the event off with a bang in one of the prettiest looks we’ve seen so far! Karlie rolled up to the star-studded Dior Haute Couture show on January 21 in a totally sheer dress that flaunted her long legs and perfect butt. Don’t get it wrong; she wasn’t completely uncovered underneath her gown! The model opted for a tight, black, backless bodysuit that revealed a hint of her butt.

Pairing the sophisticated gauzy gown with sky-high metallic heels only made her gorgeously long legs look better. You can see the pic of Karlie at the Dior show by scrolling down. Wow! When you think “see-through,” you probably also imagine something scandalous. Not the case for Karlie. The maxi dress is sophisticated and stylish, with a high neck and long, tulle sleeves. It’s just as beautiful as she is! Later in the day when it started to get a bit chilly, Karlie layered up with a chic, olive green cape.

Karlie had a busy and wonderful 2018. She married her longtime boyfriend, Joshua Kushner, 33, in October. They had a surprise wedding that they announced on Instagram, and it was apparently a very small and intimate affair. Her bestie Taylor Swift wasn’t even there! And, it was announced that she’s replacing Heidi Klum as the host of the new Project Runway when the supermodel and Tim Gunn start their new venture! Only good things are coming in 2019!