Happy Holidays from the Kardashians! The famous family revealed their highly-anticipated 2018 Christmas card on Dec. 23 and it was definitely worth the wait! Khloe Kardashian, 34, was the first to reveal the shot, writing, “Merry Christmas!! We all wish you love and harmony. So far this is by far my most favorite of any Christmas. I have all I could ever want. FAMILY.” In the heartwarming family pic, Khloe posed with her sisters and fellow mommas Kylie Jenner, 21, Kim Kardashian, 38, and Kourtney Kardashian, 38, on a couch — along with all of their cute kiddos!

Everyone was wearing white in the pic, although Khloe had a gold crown atop her head. Her 8-month-old baby True Thompson smiled on her lap, while Kourtney sat beside her with Penelope Disick, 6, and Reign Disick, 4. Her other son Mason Disick, 9, was off to the side of the couch with Rob Kardashian‘s daughter Dream, 2, climbing onto his back. Kylie came next with 10-month-old Stormi Webster standing on her legs in a white onesie, and Kim sat with her brood at the end of the couch. North West, 5, was peering over her shoulder, while Saint West, 3, and Chicago West, 11 months, posed perfectly on her lap. Aw!

The family shot is seriously so cute, we can’t take it! Fans are freaking out — and also asking why Kendall Jenner, 23, and Kris Jenner, 63, couldn’t be included in the festive photo. 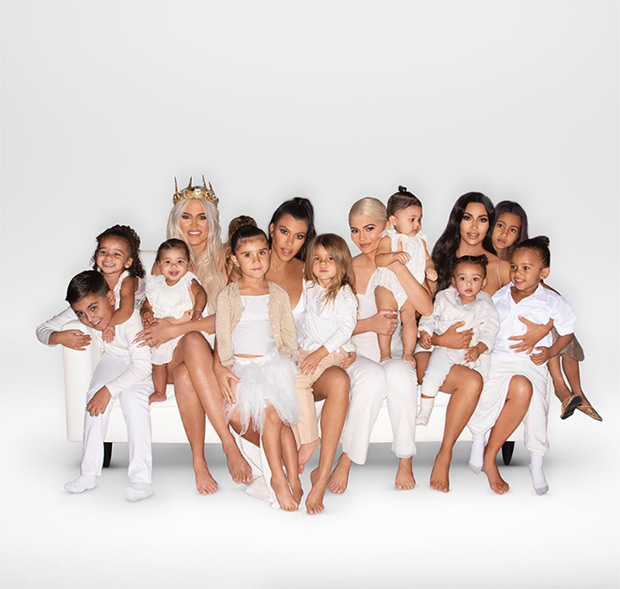 Although many claimed there would be no holiday card from the Kardashians this year due to a comment Kim made about the difficulty of getting everyone together at the last one, we’re glad it wasn’t true! With so many new arrivals this time around, including Stormi, Chicago and True, we just knew it had to happen! Since they’re an entertaining family with their own reality show, they always know how to come up with eye-catching themes that leave their fans fulfilled with holly jolly memories!

This year’s festive gem of a photo was every bit as amazing as last year’s too. In 2017, the KarJenner clan decided to keep their wardrobe simple but effective with matching white tops and blue jeans. Rob was noticeably missing from the photo shoot but the pics were still a sight to see! Kim, Khloe had fun sharing teaser photos on social media before the big reveal and we have to admit, once we saw the end result, it quickly became one of our favs!