Larsa Pippen, 44, is speaking out for the first time since news of her divorce with Scottie Pippen, 53, broke on November 2. — And, she’s on the defense. After news of their split, critics took to social media to brand Larsa as a “gold digger.” Many accused the reality star of cheating on the Chicago Bulls legend. The critics’ argument? — “This isn’t the first time there’s been rumors you cheated!”, one person wrote online. Now, Larsa is firing back, in a now deleted Instagram note, posted to her story on November 7.

“Ppl are so insensitive to my life. I’m a lover and will never say anything negative about him. My soul isn’t built for negativity. I’lll take a beating publicly ppl saying I cheated when believe me it wasn’t like that,” she wrote.

The frequent Keeping Up With The Kardashians guest star went on to hint that she may have been the one to end their marriage, claiming Scottie wasn’t there for her when she needed him most.  “He was no where around,” Larsa continued. “I cried oceans after him. I would do anything for him. Ppl saying I’m a gold digger is insane I don’t care about money and I’ve had it my whole life. I spent my bday, New Year’s Eve, Times when I needed him alone. At some point i decided I have to live my truth and here I am”. 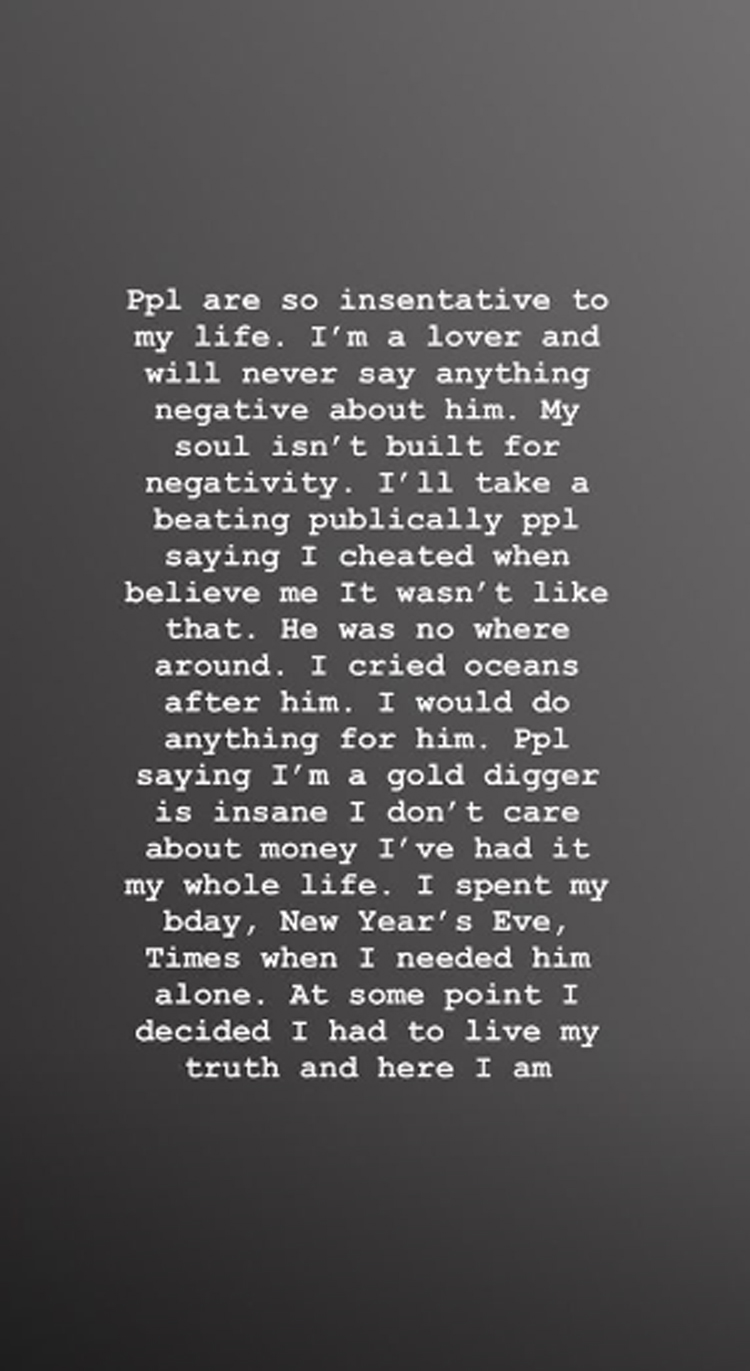 Larsa Pippen denies cheating on Scottie in her first statement since news of their divorce. She slammed the claims in a note on her Instagram story, Wednesday, November 7, 2018.

Larsa also shared another cryptic post to Instagram on Wednesday, which featured a photo of herself wearing a sweatshirt with the phrase, “Needy AF.” She captioned the photo with, “Sweatshirt says it all.”

Larsa and Scottie were married for 21 years before they decided to call it quits. “It is with deep sadness that Scottie and I announce that we are legally separating,” Larsa told TMZ. “We have both tried very hard for a long time to make our marriage work and have ultimately come to the conclusion that it is best that we live separate lives.”

Related: Scottie Pippen’s Kids: Everything To Know About The Basketball Star’s 8 Children

This is the second time the pair have filed for divorce in just over two years. Larsa’s reportedly asking for joint legal and physical custody of their four minor children — daughter Sophia and sons, Scotty Jr., Justin and Preston! — as well as spousal support.