It wasn’t a happy Halloween for David Eason. His wife, Teen Mom 2 star Jenelle Evans, revealed she’s “realigning [her] jaw” in a Snapchat video on Oct. 29, and Chelsea Houska’s dad Randy, a dentist, suggested it was “un-aligned” in an Oct. 30 tweet! Although David’s name wasn’t explicitly stated, the tweet arrived in the middle of speculation that Jenelle was “missing teeth” following the leak of her 911 call from Oct. 13, in which she told the operator, “My husband assaulted me.” Jenelle has since claimed David never assaulted her and that she’s using a retainer, so David didn’t appreciate Chelsea’s dad poking fun at the situation! “Mr. Randy, I’m going to ask you a question, punk. When was the last time you had your jaw realigned?” David asked in a now-deleted Instagram video on Oct. 31. “Hey punk, huh? You need to get straightened up? I’ll do it for ya, free of charge. Come on down to my dentist’s office, bud. I can even pull teeth. I can realign your jaw.” And those weren’t even the worst threats!

“So you trying to tell me, that some grown ass man, who is supposedly happy in his life, he’s got to keep talking sh*t about me? Why though?” David continued in a second video. “Maybe you don’t got enough people coming in to your dentist office?” And here’s where David got even nastier! In a third video, the father of three then referenced the Confederate flag he wore and took heat for on Oct. 27. “Does this flag offend you?” he asked. “Because you know what it means, I’ve got guns, don’t f**k with me. And I’ve got vicious dogs.”

However, David did leave one post up. He posted the tweet that triggered the whole ordeal, writing over Randy’s message, “Someone take this man’s dental license away!” You can see it below. As a refresher, Randy was replying to Jenelle’s Snapchat video that a fan posted, in which she said, “Supposedly I got my teeth knocked out, right? Wrong! If you’re dying to know, I have a retainer. Why do I have a retainer on my teeth? Because I’m realigning my jaw. Instead of going the plastic surgery route, like most people do, I’m not.” But the dentist didn’t buy the story, joining the fans who are worried that the MTV star was actually a victim of domestic violence. 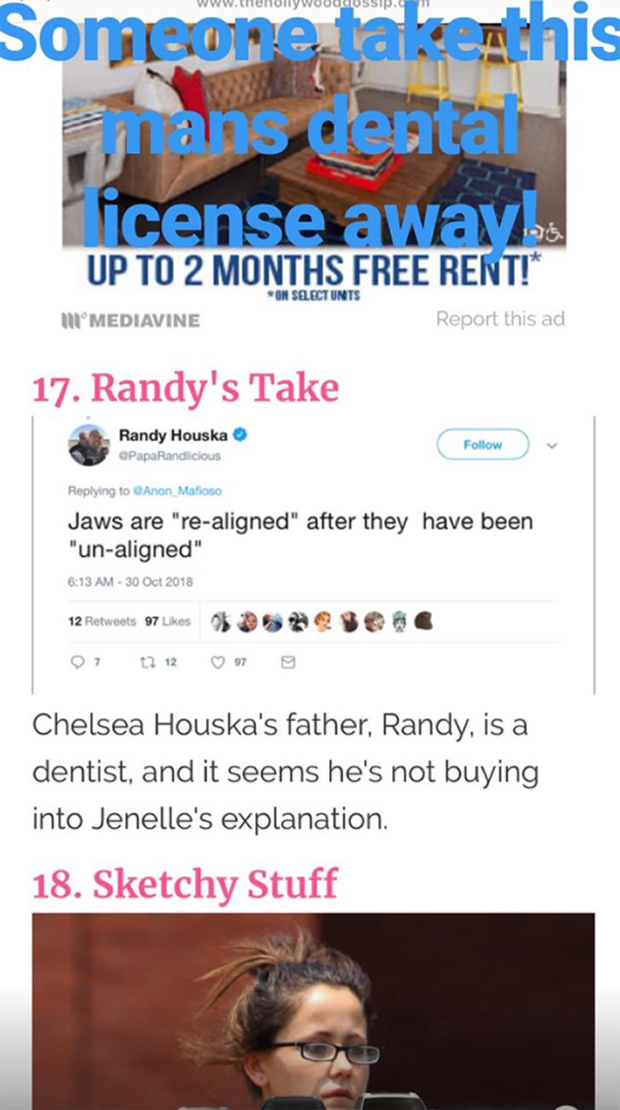 Jaws are "re-aligned" after they have been "un-aligned"

David’s Instagram tirade is yet another social media attempt to prove he and Jenelle are doing fine. Following the mother’s hospitalization on Oct. 13, which her rep blamed on “merely a trip” at a party to TMZ, she and David have gone on to post PDA pictures and happy family outings to Instagram. And as we’ve told you, Jenelle even straightforwardly stated, “I’m just sick of hearing it [the domestic violence rumors],” in a YouTube video on Oct. 25.