Be it in a bikini or in sheer lace, Elizabeth Hurley looks amazing! The ‘Royals’ star proved that even when the weather turns cold, she could still turn heads by rocking leather pants and a see-through top!

Elizabeth Hurley, 53, may be a “queen of summer,” but the autumn weather doesn’t mean she stops looking sexy AF. Elizabeth, who always looks like she’s living her best life, was spotted with her ex-husband, Arun Nayar 53, in London on Sept. 27. During this night out, Liz wore a pair of skin-tight leather pants and a sheer black top that revealed her bra underneath. Don’t get it twisted – this wasn’t a wardrobe malfunction, as Liz was all smiles as she left the Annabel, a “members only” club in London, to join her ex in a black cab.

If it wasn’t obvious, Liz and Arun have remained friendly following their divorce in 2011, after four years of marriage, according to the Daily Mail. The two actually parted ways in December 2010, following a little bit of embarrassment. Liz was photographed while kissing cricketer Shane Warne in a London hotel (both she and Shane issued statements following this scandal, saying their respective messages had been over for a while.) It seems that eight years later, she and Arun are all good. Similarly, Liz has remained on good terms with her other famous ex, Hugh Grant, 58.

The first day of fall was quite literally less than a week ago, so it will be a while before Elizabeth Hurley is seen in a bikini again, barring any last-minute trips below the equator. She pretty much claimed the crown of “Queen of bikini” by showing off her own line of swimwear on her Instagram. She even made a one-piece look hot as the summer sun, all while flaunting off a body that looks flawless. It seems that her fitness regimen and diet continues to pay off. She’s 53 but looks half that. Maybe she and Carmen Electra, 46 — who also recently posed naked while looking like she was still in her 20s — can team up on a project? 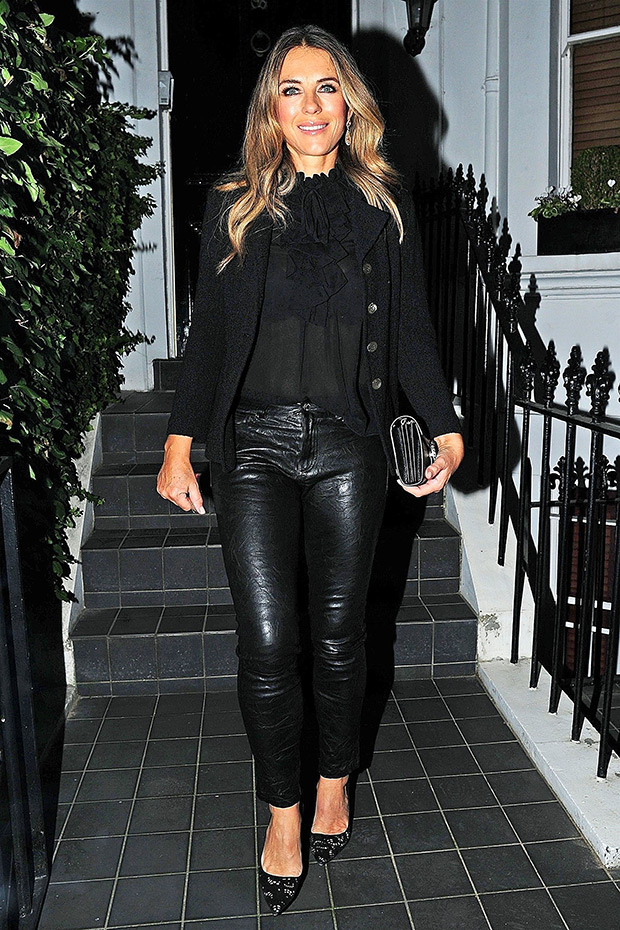 Of course, Elizabeth doesn’t need bikinis to look hot. She doesn’t need to wear anything at all to do that, in fact. Liz is very comfortable in her skin and isn’t afraid to pose topless or go swimming without a top. While that may be great for her fans, with the temperatures dropping, here’s hoping she stays covered. After all, no one would want her to catch a cold, now would they?