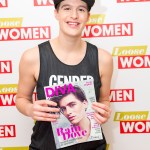 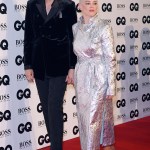 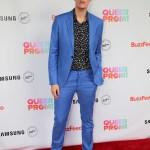 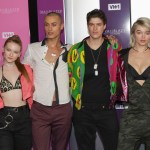 Rose McGowan claims that Rain Dove was the person who Asia Argento texted with about her alleged relationship with Jimmy Bennett. Here’s everything to know about the model.

Rain Dove has found themself at the center of Asia Argento’s sexual misconduct scandal, after Rose McGowan released a statement revealing their involvement (NOTE: Rain is gender non-conforming, and we will refer to them as ‘they,’ as Rose did in her statement). Rose claims that Asia confirmed to Rain via text message that she slept with Jimmy Bennett when he was a minor (Jimmy alleges that the hookup happened in May 2013, when he was 17 and Asia was 37). Asia also allegedly told Rain that Jimmy had been sending her “unsolicited” nude photos since he was 12 years old, according to Rose. Here’s more to know:

1. Rain and Rose are a in a relationship. In her statement, Rose referred to Rain as “the being I’ve been dating.” This was the first time she confirmed the relationship, however, it’s been rumored for quite some time now. They were photographed kissing in New York City at the end of July, and in August, Rain took to Twitter to tweet about the romance. “I’m dating a human many hate me 4 dating,” they wrote. “Yet those people never met them. Likely never will. They don’t see the activism behind the scenes, hard work, ppl this Being surrounds themself w/. They only believe what they read in tabloids & it’s sad cuz I wish ppl would think 4 themselves.”

2. They are a model. Rain has modeled as both a male and female in various runway shows and photo shoots. Their modeling career actually began as a bit of a joke after a friend dared them to attend a Calvin Klein underwear casting as a male. After the casting, Rain made contacts in the industry, and booked their first modeling career three months later.

3. Rain & Asia grew close after the death of Anthony Bourdain. Rose’s statement reveals the progression of the relationship between Rain and Asia. Asia was dating Anthony Bourdain at the time of his death earlier this year, and afterward, Rain, Asia and Rose took a trip to Berlin together (Rose and Asia formed a close bond themselves after they both accused Harvey Weinstein of sexual assault in 2017). Following the trip, Asia and Rain stayed close. “I know Rain is a person to whom many high profile entities consult when they are experiencing social pressures because Rain is good at guiding them through the research confrontation, rehabilitation and solution process. While they are a person who is good at keeping a secret for those dedicated to making things right – they are also justice driven.”

4. They are college educated. Before becoming a model, Rain studied genetic engineering and civil law at University of California, Berkeley. They also joined the Colorado Firefighters at this time.

5. Rain does not have preferred gender pronouns. Although Rose referred to Rain as “they” in her statement, the model has been open in the past about having no preference. “Gender doesn’t exist in my book,” they previously told Allure. “I love the body I have. My state of being is just unique.” They added that they’re fine with being called “he, she, them or even it.”