Tyson Beckford is continuing to troll Kim Kardashian hard after she seemed to hint he was gay for not liking her body. We’ve got his latest epic diss telling her to ‘hit the gym, not the plastic surgeon.’

Tyson Beckford is having a moment! The model has found himself with the most attention in ages after he dissed a photo Kim Kardashian‘s body on July 31 and she fired back with a comment seeming to hint that he might be gay. Tyson is back at trolling the reality star with a meme of Kim’s face superimposed on a muscled up man’s body that made the rounds last winter as “Gym Kardashian.” A fan sent it to him with the caption “Hit the gym, not the plastic surgeon,” and the 47-year-old shared it on his Instagram stories on Aug. 1.

This is the second attack in one day, as he wrote on an Instagram story earlier, “My opinion on women who do plastic surgery stays the same, not or me!” he wrote. “I personally don’t care for it! Done end of story!” He went on to add, “Always gonna pick Beyonce over anyone else.” Tyson originally started the feud when he commented on a photo of Kim leaving a Jimmy Kimmel Live appearance on July 30 where her right and left hip appeared to be out of proportion in skin-tight leggings.

In the comments section of the pic on The Shade Room‘s Instagram page, the model wrote “Sorry I don’t care for it personally,” on July 31. “She is not real, doctor f***ed up on her right hip,” he continued in another. Kim clapped back but in a controversial way, writing, “Sis we all know why you don’t care for it.” Some took that as her attempt at allegedly hinting he was gay for not thinking that her body was hot. 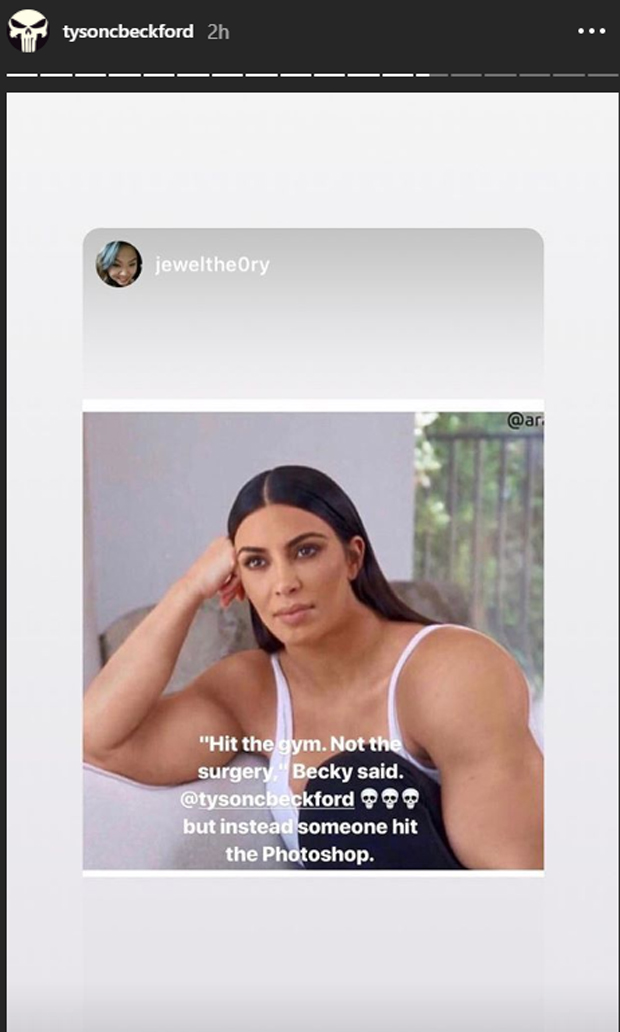 Tyson himself seems to believe that’s exactly what she was doing, as he posted an Instagram pic showing a still from an article by Out magazine asking if Kim was “using homosexuality as a punchline?” He also included a tweet from a fan that read “Kim Kardashian, you are questioning Tyson Beckford’s sexuality, like being ‘gay’ is something evil. How about you worry about your husband’s mental health because you should be more concerned with his well being and not if someone is gay. The nerve of this woman. Not today Kimberly.” Next to it Tyson simply captioned “Preach” to the tweets. So far, Kim hasn’t responded to his latest messages about her.