Ouch! Nicki Minaj managed to make it through her BET Awards performance with a major wardrobe malfunction and fans can’t stop talking about it! See her painful camel toe in these viral photos!

Nicki Minaj, 35, is a trooper for not letting a painful-looking wardrobe malfunction mess up her BET Awards performance on June 24! The rapper took the stage at Staples Center to perform an intense medley of “Chun-Li” and “Rich Sex” when fans noticed her red latex bodysuit was hugging her a little too tight in certain areas. Some Twitter users even joked about which body part would slip out of the bodysuit first, her breasts, or her you-know-what! Take a look at the wardrobe malfunction below.

The plunging bodysuit featured a sparkling belt and neckline, which exposed her ample cleavage for the world to see. Nonetheless, Nicki appeared unfazed by the wardrobe mishap, and strategically placed a hand over her private area and continued to strut the stage. But, observant fans knew what they had witnessed and, of course, they had a field day with her camel toe on Twitter. Since latex is a stiff material to say the least, one fan noticed that Nicki had done the unthinkable. “How does Nicki Minaj have a camel toe in latex?” the female fan questioned. “Nicki Minaj Camel Toe Giving Me Life,” another fan wrote. 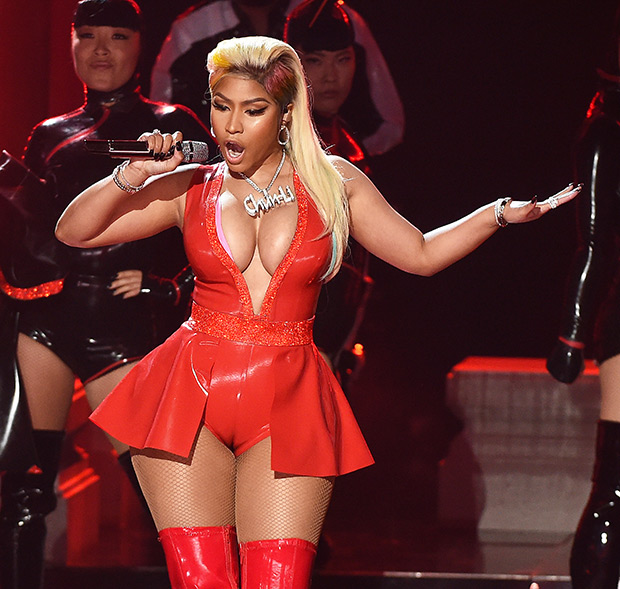 Despite her camel toe issue, Nicki nailed her performance at the annual awards show. While Lil Wayne, 35, who is featured on “Rich Sex” wasn’t present, 2 Chainz, 40, and Big Sean, 30, were. The two rappers joined Nicki for the end of her performance, which concluded with their “Big Bank” collaboration. “Chun Li” and “Rich Sex” will both be featured on Nicki’s upcoming fourth LP, Queen, which will be available on August 10.

Nicki’s BET’s performance came shortly after the the recent releases of “Bed” and “The Light Is Coming”, her latest collaborations with her good friend, Ariana Grande, 24.