The King of Pop reunited with his daughter, as Paris Jackson shared a photoshopped pic of her and Michael Jackson in a sweet embrace. Yet, someone though this altered photo was ‘creepy!’

For the most part, fans reactively positively to the picture Paris Jackson, 20, posted to Twitter on April 10. The photoshopped image put modern-day Paris in between her late father, Michael Jackson, and her mother, Debbie Rowe, 59. Her mentions were filled with love – “I love this so much. I don’t doubt he’d be so proud of you,” “Michael is smiling watching over you” – Tank Girl actress Lori Petty, 54, said that the image was “creepy,” according to Daily Mail.

Lori, who the Mail refers to as “a friend of the star,” commented that the edit job was odd in a now-deleted comment. Paris disagreed. “No, I think it’s nice to dream about what it would be like to have parents, and to have it put into something I can see, even if it’s a fan-made edit.” Lori seemed to catch on to where was Paris was coming from. “If you like it, I love it xx,” she tweeted, adding that she “didn’t mean to be unkind” and that she “love(s) you.” Paris replied, “love u too darlin.”

Not everyone was so forgiving. “Wow what a ‘fake’ friend of Paris Jackson,” twitter user @supmis11 tweeted. “They are her parents. You sound so evil.” First off, relax. Lori said it was creepy. There are a lot of other things said on Twitter more “evil” than that (hello, Donald Trump!) Lori quickly clapped back at this unnecessary chatter.

“I’m not a fake friend. I think [a] photoshop of ME is creepy. I’m of a different generation. I’m sure Paris is accustomed to seeing photoshop of her late father. I’m not. And I apologized,” Lori tweeted. And…you wouldn’t believe it, but civil discourse actually broke out on the Internet! “Oh, okay. I’m sorry,” @supmis11 tweeted. People playing nice on Twitter. It can happen. Perhaps that’s the power of Paris-Michael Katherine Jackson? 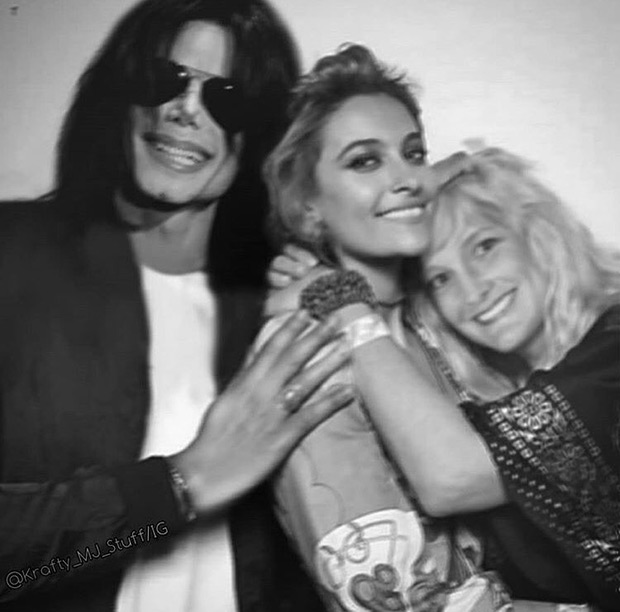 It could just be the power of love radiating from Michael’s daughter. Speaking of love, she and Cara Delevingne, 25, all but confirmed they were dating when they were spotted making out on a double date in March 2017. Some were worried this romance was in jeopardy when Paris and Chris Brown, 28, got comfy at her birthday bash, but a source EXCLUSIVELY told HollywoodLife.com that Breezy thinks of Paris as “his little sister.” No romance there – just good friends, like Paris and Lori!