Looking like a real-life mermaid, Megan Fox, 31, seductively modeled the spring line from lingerie firm Frederick’s of Hollywood. For the sexy AF shoot, the actress stripped down on the beach, revealing that even after giving birth to three kids, her body is still as unviable as ever! In the campaign pics, Megan wears a series of lacy, semi-sheer bras, panties, and bodysuits, and of course she rocks every stunning looks with complete confidence. Megan, WHAT is your secret? Click here to see other gorgeous celeb moms looking fierce in lingerie.

In one photo, Megan sported a teal and black, figure-hugging strapless ensemble as she strolled along the shoreline at dusk. She also had on layers of bohemian necklaces and a shawl casually draped over her slim frame. She also donned a sultry smokey eye complete with wind-blown hair. In another shot, Megan gives off major Little Mermaid vibes as she poses on a sandy beach perched amongst rocks. In that image she’s wearing a white lacy bodysuit with cutouts accompanied by her bohemian jewelry. Another favorite shot of ours shows Megan in a tiny black bra and panty set laying down on what appears to be a hammock or wooden dock.

Megan is currently a shareholder of Frederick’s of Hollywood after she snapped up the company with business partners after it went bust back in 2016. Ever sine, she’s acted as their brand ambassador and creative director. “If you look good, you feel good, and if you feel good, it shows,” Megan has said of her business. “I think women should own what they wear. Confidence looks great on everyone.” We could not agree more! 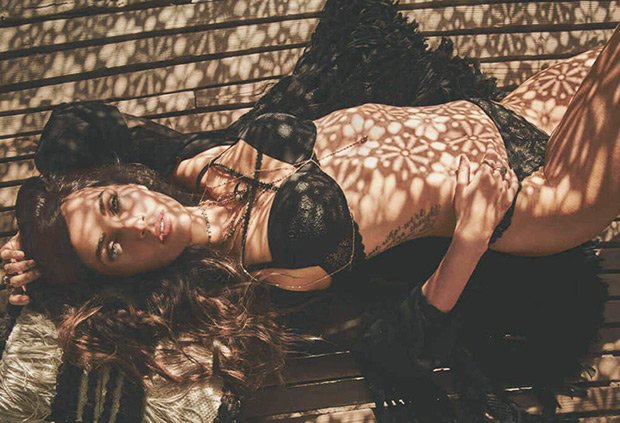 Megan shares three children, all boys, with her husband Brian Austin Green, 44. Their sons, Noah Shannon, 5; Bodhi Ransom, 4; and Journey River, 1, are all super adorable! We especially love how Megan and Brian are fully supportive of their boys, and don’t restrict them creatively. Noah, for example, often wears princess dresses out in public, and his parents are nothing but encouraging.

“I’ve heard from some people that they don’t agree with him wearing dresses. To them I say, I don’t care. He’s four and if he wants to wear it then he wears it,” Brian told Hollywood Pipeline’s Straight from the Source in August. “And it’s dresses or goggles or slippers or whatever — it’s his life, they’re not my clothes. … I feel like at 4 at 5, that’s a time when he should be having fun. He’s not harming anyone wearing a dress. So if he wants to wear a dress, good on him.”