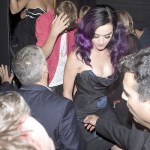 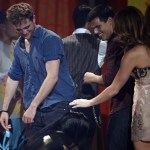 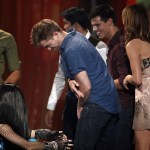 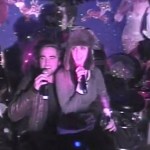 Robert Pattinson and Katy Perry were spotted on a cozy dinner date in Los Angeles on Jan. 26 and they looked cuter than ever! See the pics of their night out here!

Robert Pattinson, 31, and Katy Perry, 33, showed off their new reported romance by making out in public when they went on a sweet dinner date near Silverlake, CA on Jan. 26 and now there are pics to prove it! A Twitter user posted two photos of the duo joined by two friends at a corner table in Taix French Restaurant. Katy can be seen holding her phone up to her ear in one pic as Robert smiles and gazes at her. The next pic shows them sitting across from each other in different seats than the other pic and looking off to the side at one of their friends. SEE BOTH PICS OF ROBERT AND KATY’S DINNER DATE BELOW! According to an eyewitness who spoke EXCLUSIVELY with HollywoodLife.com, they were indeed very flirty with each other. There was tons of touching and tickling throughout the night as they mingled and appeared to be extremely comfortable around one another. They were respected by the other restaurant goers and although some people were excited they were there, no one approached the playful couple.

Robert and Katy’s recent outing together doesn’t come as a complete shock since Robert has reportedly had a crush on Katy for a while. The two talented stars have been friends for a while but now that they’re both single, it could be the right time to turn that friendship into a serious relationship! It’s said that some of the best romances begin with friendships and we can’t help but get excited at the prospect that there may be a new power couple underway!

The Twilight actor’s recent shocking split with longtime love FKA Twigs, 30, has definitely left him with a big change and it’s good to see him having a great time with someone he knows well! Katy’s own split with Orlando Bloom, 41, last year has allowed her to be single for a while. There’s been talk that the “Firework” singer and her former beau might get back together but from the looks of her date with Robert, we’re not so sure that’s going to happen!

HollywoodLifers, do you think Robert and Katy make a good couple? Let us know your opinions!