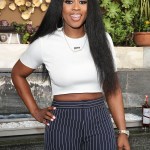 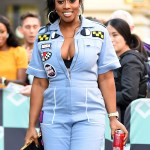 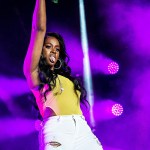 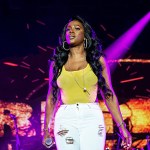 Spending six years in prison could easily end a marriage, but for Remy Ma and Papoose it was just the beginning. They tied the knot while the female rapper was incarcerated, and he made sure to visit her every single day!

We already knew Remy Ma, 37, and Papoose, 39, had a strong marriage from watching them on VH1’s Love & Hip Hop: New York. But Remy just opened up in HollywoodLife.com‘s podcast about how they handled their relationship while she served six and a half years out of her eight year sentence at the Bedford Hills Correctional Facility for Women from 2008-2014. Here’s what she said when we asked who was there for her while serving time in jail: “My husband, of course. He was so bad that I had to tell him to stop coming to visit me. No, seriously though. The first year that I was there he came every single day.” That’s no small feat considering the maximum security prison in Bedford, NY, was about an hour and a half drive from where Papoose was living in Brooklyn at the time! Listen to the whole podcast here.

Papoose was clearly devoted to Remy, which she felt blessed for. “With the women, it would be literally tumbleweeds blowing through the visiting door,” she said. “The boyfriends, they leave. The husbands, they leave.” Meanwhile, the couple will be celebrating their ten year anniversary this coming May. But her spouse wasn’t the only person who helped the “ShETHER” singer keep up her spirits in prison. “[Papoose] definitely was a major part. Him and maybe my DJ,” the rapper said. “Like my DJ who I just thought was the guy that goes with me when I’m performing. If I knew I needed something and my husband couldn’t do it, he would leave his job and come bring me whatever I need. He kept the phone on for me to call. And that was just the way it was.”

On March 27, 2008, Remy was convicted of assault, illegal weapon possession and attempted coercion in connection with these charges. While she had people helping her through her sentence, she still spent a lot of time alone which she used to contemplate her future. “I just couldn’t fathom counting in years. And where my window was all I could see out of the window was trees. So, say if it was 2009 and the trees were green, I knew I had about six or seven more summers to go. If it was 2013 and the trees were [bare] branches I had about three more winters. That’s just how I counted my time, in seasons.”

In fact, those yearly patterns inspired the title of her forthcoming album Seven Winters, Six Summers — but its her dedication to her craft that made the future LP possible. “I also want people to know who have gone through things like I went through or may be facing something like that in the future that you can come back and you can do things,” she said. “I never took no for an answer. I got released from prison at 4:30 p.m. By 8:00 p.m. that night, I was in the studio recording.”

To hear more of the Grammy-nominated artist’s reflection on her prison stay, as well as where she’s at now in her personal and professional life, check out our podcast!

HollywoodLifers, what do you think of our podcast with Remy?