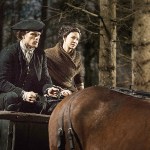 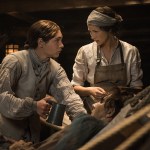 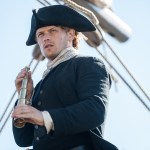 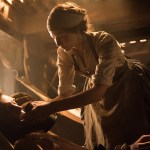 This was the best ‘Outlander’ episode of the season since Claire & Jamie’s reunion. How fantastic to discover that Geillis Duncan has escaped being burned as a witch & Lord John Grey just happens to be the governor of Jamaica.

Thank the Lord for coincidences. First, Jamie (Sam Heughan), Fergus and the rest of the crew of cousin Jared‘s ship washed up on the very same beach as Claire (Caitriona Balfe) and now the reunited Frasers discover that Jamie’s old friend, Lord John Grey, is actually in charge of Jamaica, as governor. That could come in very handy because young Captain Leonard is as determined as a dog with a bone to capture Jamie and bring him to trial for murder and sedition. Just when Jamie and Claire have come face to face with a happily stunned Lord John and have a hot lead on young Ian, Captain Leonard arrives in Kingston, Jamaica to chase Jamie down. This couldn’t come at a worse moment. The pair are on the way to Geillis Duncan’s planation to hunt down Ian, who is being held captive there.

Geillis has got quite the racket going in Jamaica. When Claire first spots her at Lord John’s ball, she gets chills, thinking she has just seen a ghost. Her last view of Geillis was of the beautiful, pregnant redhead being condemned to death by burning at the stake for being a ‘witch’. Claire had been condemned as well, by the superstitious Scottish peasants living near Colum McKenzie‘s castle. It was only the last minute arrival of the heroic Jamie that saved Claire’s life. But, as Jamie dragged her away, Geillis shouted ‘1968,’ the year she, too, had gone through the stones. Now, she is just as youthful looking and beautiful as ever, living as a widow of a wealthy plantation owner in Jamaica. “It was the’ratling’ that saved my life,” Geillis confides to Claire at the party. The villagers weren’t permitted to burn her at the stake until the innocent baby could be born. For three months, she was left in the town’s miserable ‘thief hole’ until she went into labor. Once she gave birth, her married lover and Jamie’s uncle Dougal came to fetch the baby ASAP before anyone could find out that the bairn was his. Fortunately for Geillis, he was able to bribe the guard and see to it that an already dead woman was dragged to the stake to be burned the next day. “No one gets to witness their own funeral, let alone their own execution,” Geillis ironically recounts to Claire, because yes, she being Geillis managed to watch the “execution,” while disguised.

Meanwhile, Dougal found a home for her baby and she escaped, eventually marrying her wealthy plantation owner, who just happened to succumb to some mysterious disease once he took her as a wife. Strange, how the same thing happened to her first husband. NOT! Now Geillis collects young virginal boys for pleasure while also hunting for the treasure she left on Silkies’ Island. Young Ian becomes one of her boys. He was captured by her crew while trying to get the McKenzie treasure for Jamie, who had discovered it years earlier. Unfortunately, just after he retrieved it, Geillies’ crew retrieved him and Geillis is all about seducing him. It seems that she has developed a bit of a habit seducing teen boys. “I have my way with them — virgins have such power inside and after that I have no use for them,” she confesses to terrified young Ian. “Come, it’s not such a bad way to go.”

No wonder Ian chokes on the plum cake she’s given to him! She’s already greeted him while bathing in goat’s blood. “The protein and iron keep my skin young,” she explains, while showing off her naked body. But, Geillis has more than sex with young Ian in mind. What she really wants is her sapphire stone. The one that Jamie took out of the box of jewels years ago and gave to Lord John Grey, who was then running Ardsmuir prison. She NEEDS that stone. That’s because it’s part of a trio of sapphires that are required for Archibald Campbell‘s sister Margaret to do a special ‘reading’ for her. What we still don’t know is why the reading is so important to Geillis. She’s desperate for it and has actually imported the Campbells all the way from Scotland to do it. Margaret is not happy about it at all. “I fear the prophecy — it’s born of blood and death,” she intones. “This prophecy will bring death. I want to help people.”

Geillis, however, is delighted to drug Ian into confessing that his uncle Jamie Fraser found the stone and she’s even more thrilled to actually then discover Lord John wearing it on his breach coat at the party. The other person who is stunned by seeing ghosts, of course, is Lord John, who can barely contain himself coming face to face at his own gala with his most favorite adult person in the world — Jamie. And of course the mysterious Claire – the wife that Jamie had told him had died. And, naturally, Jamie is delighted to get news of Willie, his beloved son, who Lord John is now raising as his own. “Is Willie here?” he asks, all excited. “How is he?” Unfortunately, Willie has not yet arrived from England. But, even more unfortunate is that ambitious Captain Leonard has and he sees a big promotion in his future if he can capture Jamie.

Before we see that disastrous event, however, Geillis finally gets her reading from Margaret by “borrowing” Lord John’s sapphire. It is a strange one though — a new Scottish king will arise in Scotland upon the death of a 200 year-old-baby. What the? Margaret doesn’t know what that means. Geillis doesn’t, and neither do we. But first, will Claire find young Ian and free him from Geillis’s clutches before the evil time traveller does away with the teen? Will Lord John save Jamie? We have to stay tuned.