First Son Barron Trump was spotted with his parents out to dinner over two months after his last public outing. Once criticized for dressing ‘too casually,’ the 11-year-old wore a smart suit in this rare pic.

Look who it is! While the elder Trump children are thrust into our faces daily, youngest son Barron Trump, 11, is rarely in the public eye. But photographers finally caught a glimpse of the first son for the first time in over a month! Barron he was spotted having dinner with parents, President Donald Trump, 71, and First Lady Melania Trump, 47, on October 14. The first son, who’s usually very reserved, seemed like he was having a fun night out at the Trump International Hotel in Washington, DC, all smiles as he left to go back to the White House with his mom.

It wouldn’t normally seem noteworthy that Barron was wearing a full suit out to dinner with his parents, but the night out comes shortly after the first son was criticized by some for dressing “too casually” or “like the president’s son” in an odd Daily Caller op-ed. The kid’s only 11! The criticism came after Barron had the apparent gall to wear shorts and tees during summer. Former first daughter Chelsea Clinton leapt to his defense on Twitter. She knows all too well how brutal life can be in the public eye as the daughter of a president. “It’s high time the media & everyone leave Barron Trump alone & let him have the private childhood he deserves.”

First Lady Melania has made it a point to keep Barron out of the spotlight as much as possible so he can still have a normal childhood. Or, at least, whatever “normal” means to a Trump child. The mother and son spent the first five months of the presidency at home in New York City at the Trump Tower, waiting until Barron finished the school year to join the president in Washington, DC. It was a definitely unusual move — the First Family moves to the White House after the inauguration, always — and one that was widely criticized. The cost of keeping and protecting Melania and Barron in NYC was millions of dollars, and stripped the NYPD of officers needed in other areas of the city. Barron’s now attending St. Andrew’s Episcopal School in Potomac, Maryland, a pricey private school located about 30 minutes outside DC. 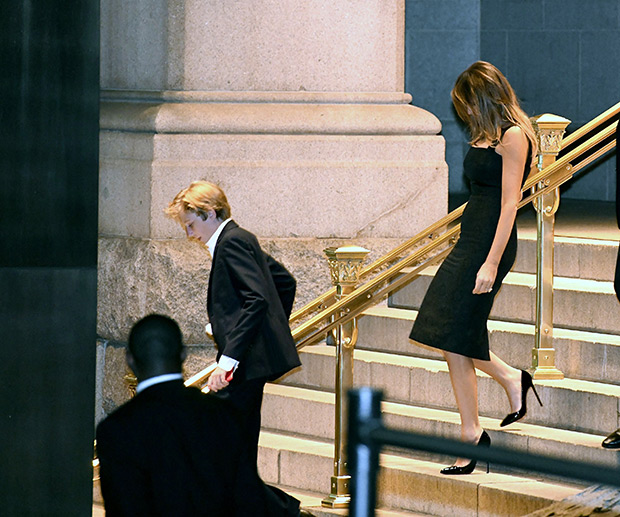 HollywoodLifers, are you surprised that Barron hasn’t been seen in public since August? Let us know.