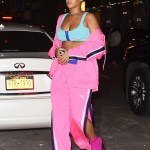 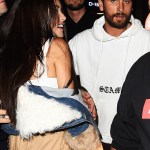 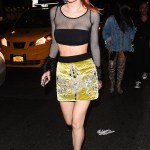 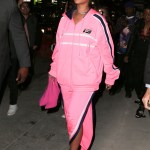 Leonardo DiCaprio and Rihanna traditionally have one of the flirtiest friendships in the biz, and Leo looked shady as hell as he snuck into RiRi’s Fenty Puma after party during Fashion Week on Sept. 10. So was he on his way to canoodle with Ri?

Sorry, Leonardo DiCaprio: we can see you. The 42-year-old attempted to cover his face as he headed to Rihanna‘s Fenty x Puma by Rihanna S/S18 Collection after party at Magic Hour at the soon-to-open Moxy Times Square Hotel in NYC, but he wasn’t fooling us. Not one bit. See the new pic of Leo hitting up the event below, and click through our gallery to see all of the best photos from Ri’s big night.

Leo and the “Work” singer, 29, have a storied past. They first got close in 2015 after ending up at the same events together, like Caleb Followill‘s birthday bash at West Hollywood’s Sunset Marquis hotel. Though Leo’s rep said he was single at the time, the pair was seen together in 2016 at Up & Down nightclub in NYC and got cozy at Coachella that year! “They do have a connection,” a source told HollywoodLife.com exclusively at the time. Now that Ri is single again, perhaps they’re thinking of reigniting things? Either way, we ship it.

Apart from RiRi and the Oscar-winning actor, Halsey and G-Eazy, Ty Dolla $ign and Lauren Jauregui, Cardi B and Offset, DJ Khaled, Pharrell, A$AP Ferg, Bella Thorne and more were all at Ri’s party — talk about the place to be. See photos from the Fenty Puma runway show here!

HollywoodLifers, do you think something’s going on between Rihanna and Leo? Or was this just their annual friendly meet-up? Tell us!