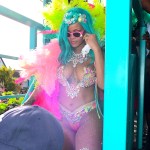 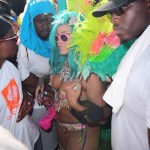 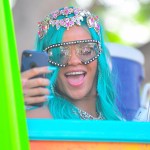 Like the rest of the world, Karrueche Tran is dying to know how Rihanna whipped her body into shape for the Crop Over Festival. Hell, the sexy pics from Barbados even got Chris Brown’s attention.

We think hell just froze over. When reporters caught up with Karrueche Tran, 29, outside a West Hollywood club to ask about Rihanna‘s sizzling Crop Over look, there were no words of hate or jealousy. In fact, the model wanted ADVICE from the “Umbrella” singer, 29, on how she transformed her body so perfectly for the massive party in Barbados. “She looked f*cking good,” boasted a possibly tipsy Karrueche in the wee hours of Aug. 8, right before getting a ride and going home. “I need to know what she’s been doing. I need to get thick like that!” With such a petite frame, Karrueche added that she probably won’t ever be able to obtain that kind of thickness…but that didn’t stop her from praising!

OK, but now we need to talk about Chris Brown for a hot second. The “Zero” rapper obviously still has eyes for Rihanna — and we mean that in a literal sense. When he saw photos of the Barbadian beauty living it up in her home country for Kadooment Day, he commented with a pair of eye emojis. No words, no smiley faces, just a set of eyes. Within a matter of seconds Chris’ peeping tom comment received thousands of likes from fans. And they’re not the only ones who noticed. Karrueche did as well! “I would do the same thing,” she gushed to reporters that same night.

Unfortunately, not everyone was in the complimenting mood. Drake thought Chris’ comment was totally desperate and creeper-ish. “It’s a sad and lonely attempt for attention,” a source told HollywoodLife.com EXCLUSIVELY. “Drake feels it is time for Chris to grow up and move on from Rihanna. Drake is very protective and has a lot of love for her even though they’re not dating anymore.”

HollywoodLifers, do you think Karrueche’s comments about Rihanna are genuine? Comment below!