Well, isn’t this some eerie timing. Right after Andrew Garfield left the LGBTQ community outraged with his bumbling ‘gay’ comments, his ex, Emma Stone, appeared on the cover of ‘Out’ magazine.

Life can be funny sometimes. Take the curious case of Andrew Garfield. The 33-year-old actor is getting dragged for saying that because he watched RuPaul’s Drag Race in preparation to play a homosexual man in a play, he’s essentially a “gay man…just without the physical act.” Yeah, that didn’t go over well with members of the LGBTQ community (or any of their allies.) While Andrew is taking cover from the backlash over his words, his ex-girlfriend, Emma Stone, 28, just appeared on the cover of OUT magazine, the publication with reportedly the highest circulation of any LGBT monthly publication in the USA. Isn’t that a bit awkward for Andrew?

For those who need a refresher: Andrew is playing Prior Walter in a London revival of “Angels In America,” the Pulitzer prize and Tony Award winning play by Tony Kushner, 60. Andrew’s character struggles with AIDS during the height of the 1980s epidemic, and while talking about what research he did for the role, Andrew said he watched Drag Race. “My only time off during rehearsals – every Sunday I would have eight friends over and we would just watch Ru. This is my life outside of this play. I am a gay man right now just without the physical act – that’s all,” he said.

Critics have pointed out that Andrew saying he’s pretty much a “gay man” from watching a reality television show about drag queens is akin to saying a person can be practically a woman from binge watching America’s Next Top Model. Others have pointed out (per Jezebel) that Andrew could have read And The Band Played On, a critical account of the culture of the initial years of the AIDS epidemic, to get a more grounded perspective for the role. To Andrew’s credit, he did recognize that as a CIS-gendered straight man, he had to work hard to do the character justice. “[A] big concern was what right do I have to play this wonderful gay role?” he told Gay Times, “I had to trust that it was the right thing…It was as about doing honour, doing justice and knowing my herstory.” 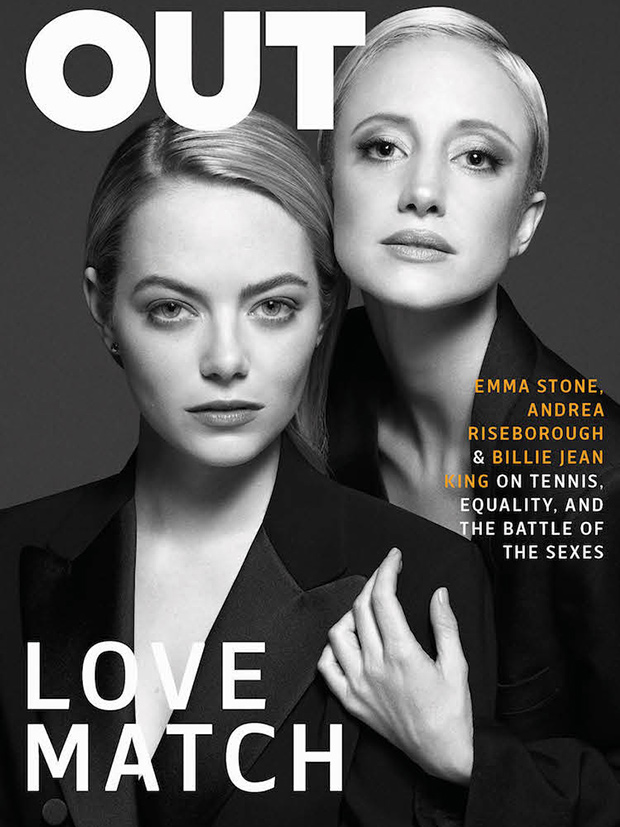 Speaking of “herstory,” Emma (who portrays Billie Jean King in the upcoming movie Battle of the Sexes) spoke on equality, respect and feminism while talking with OUT. She even revealed that some of her male co-stars have taken “pay cuts so that I may have parity” with them. “That’s something they do for me because they feel it’s what’s right and fair,” Emma remarked. “[T]his is Billie Jean’s feminism, and I love it—she is equality, man: equality, equality, equality.”

What do you think about Emma appearing on OUT’s cover right after Andrew upset the LGBTQ community, HollywoodLifers? How weird is that?