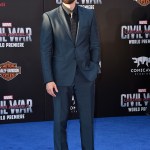 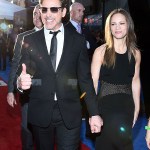 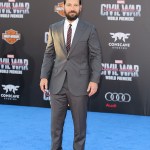 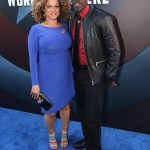 He can’t look away! Chris Evans, 34, posed alongside his Captain America: Civil War co-star Elizabeth Olsen, 27, at the April 27 London premiere, and he was photographed staring at her massive cleavage! Granted, her dress was very revealing, so we can’t really blame him!

Chris, you’re such an adorable bad boy! The Captain America star couldn’t keep his eyes off of Elizabeth’s cleavage. Elizabeth was wearing a plunging white gown with a cutout that emphasized her braless look.

Chris caught a peek at that epic cleavage, and his face was priceless. He clearly liked what he saw! But the whole thing is kind of awkward, right?!

Despite Chris staring at Elizabeth’s boobs, his favorite female body part isn’t what you think! “I’m way, way, way more of an a** man, clearly more of an a** man,” he said on Anna Faris’ podcast. “Just everyone knows. I like butts.” Well, maybe he had a change of heart!

The Captain America: Civil War co-stars looked very close at the premiere. Months before the release of Civil War, rumors swirled that Elizabeth, who plays Scarlet Witch in the Marvel movies, and Chris were an item! She’s also been linked to Avengers star Tom Hiddleston.

HollywoodLifers, what are your thoughts on this photo? Let us know!