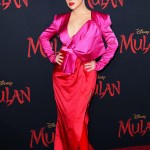 Christina Aguilera may have had too much ‘christmas spirit’ at Seth MacFarlane’s holiday party. The ‘Just A Fool’ singer was allegedly too drunk to perform with Seth during the bash, and she reportedly nearly crashed into a Christmas tree when she tried to leave!

Santa Claus may have Christina Aguilera, 34, on his list but Seth MacFarlane, 42, may have to scratch the “Beautiful” singer’s name off the invitation for next year’s Christmas party. During Seth’s annual holiday gala, Christina was reportedly a drunk “mess,” and could not get up from her seat to sing!

“Seth asked her five times to come up [and sing] and she refused,” a source at the party told PageSix of the New York Post. It seems if there was one thing Seth wanted for Christmas, it was for Christina to join him — and the 50-piece orchestra he had play the Beverley Hills party — to sing a Frank Sinatra song. Meghan Trainor, Katharine McPhee and even Bill Maher all joined their host for the fanciest karaoke ever, but not Christina.

She “was a mess.” In fact, “the reason she didn’t get up is because she was wasted,” the source claims. Unfortunately, Christina’s boozy holiday adventures didn’t end there. When it came time to leave, Christina’s man, Matt Rutler, and one of her girlfriends had to reportedly help her walk straight. It didn’t go so well.

“She was wearing 6-inch custom Louboutins,” the source tells PageSix. Those are hard to walk in by themselves, but add in a cup (or two) of “cheer?” Yikes! It clearly was too much for Christina, as she “nearly fell into a Christmas tree!” Xtina reportedly almost ended up an ornament on Seth’s X-mas tree!

As for that song, well — maybe next year, Seth! The Family Guy creator is a big fan of both singing and Christmas, as he joined Sara Bareilles to duet at the 2014 lighting of the Rockefeller Christmas tree. Maybe Stewie & Peter Griffin will release a Christmas album, since Seth, while singing as the cartoon characters, performed some of Cyndi Lauper’s greatest hits.

A rep for Christina did not comment to PageSix. Seth must have been hoping to recreate some of the magic he and Christina felt at the Lincoln Center in New York City on Dec. 3. The two came together to perform at the Sinatra: Voice For A Century concert, reports Daily Mail. Frank’s daughter, Tina Sinatra, was reportedly there at Seth’s party. It looks like she got some disappointment for Christmas.

Are you bummed that Christina reportedly was too drunk to sing, HollywoodLifers? Do you think she’s going on the naughty list?