There’s always been a bit of animosity between Kris and her stepchildren from Bruce’s first two marriages, but this call-out is taking things to a whole new level! Following Bruce’s 20/20 interview, in which he confirmed his gender transition, eldest son, Burt, took to Twitter to seemingly throw some shade at the Kardashian matriarch.

“Having a hard time not putting a few people on blast who were not supporters before hand, but want to act like they were all along,” he wrote on his social media account. Ouch! 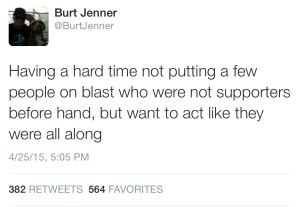 The tweet (which Burt deleted some time after posting) came just hours after Kris took to her own page, where she publicly shared her support for Bruce. “Not only was I able to call him my husband for 25 years and father of my children, I am now able to call him my hero,” she wrote.

During the interview, ABC shared statements from Bruce’s first two wives, Chrystie Crownover and Linda Thompson, but it was revealed that Kris had declined to comment. However, when she was blasted by viewers on Twitter for keeping tight-lipped, the 59-year-old reality star argued, “no one asked me to comment.”

Still, an ABC spokesperson told Daily Mail, “ABC News sent an email to [Kris’] publicity team more than once. They called and said no comment.”

Regardless, Kris was with Bruce and their family when the interview aired, and, as HollywoodLife.com EXCLUSIVELY reported, she got incredibly emotional while watching the sit-down.

“The interview made her think twice about herself and she thinks she’s failed miserably as his wife. Hearing Bruce say that they would still be together if she could handle his transition better than she did sent chills throughout her entire body. She feels she failed him,” an insider told HollywoodLife.com EXCLUSIVELY.

This is definitely a difficult time for the entire family, so we’re wishing them all the best as they deal with this huge change — and we’re hoping the Kardashians and Jenners can just get along for Bruce’s sake!

Tell us, HollywoodLifers — do you think Burt’s message is directed at Kris?