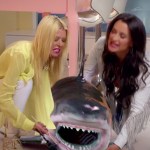 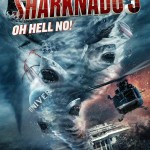 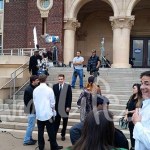 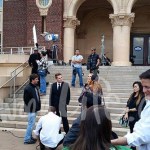 ‘Sharknado 3’ is on the way — and apparently so is a ‘Sharknado’ baby! Plus, is someone new joining the cast? We have just obtained EXCLUSIVE pics from the filming of the third installment, and they are giving us some huge spoilers!

What a way to brighten a winter’s day! Sharknado 3 will grace our eyes and ears in July and, to get you pumped for the sci-fi thriller, we’ve got some EXCLUSIVE stills from the set of the new movie which is filming right now inside Universal Studios theme park! Be warned though, there are some very serious spoilers in the pics, particularly concerning Tara Reid‘s midsection. Check ’em all out– if you think you candle handle them!

On Jan. 15, we were beyond words excited to learn that Tara and costar Ian Ziering would both be returning to the Sharknado franchise for the third film.

Now, thanks to EXCLUSIVE pics we’ve obtained from the set, we can also confirm that Chris Jericho is on board the movie!

Along with Chris’s involvement, we also now have our first peek at what might just be in store for us when the film hits the small screen. Though no plot details have been confirmed just yet, the pictures certainly give us a few hints!

For starters, Tara’s character is sporting a very obvious baby bump! Say what?

Also of note, Tara is wearing a glove where her hand had been turned into a chainsaw. (Sharknado is just the best, isn’t it?)

So obviously we’re incredibly excited for the new Sharknado, but we aren’t the only ones! In fact, Ian is just as stoked!

Ian told HollywoodLife.com EXCLUSIVELY that he’s “absolutely” ready for new Sharknado movies. “Thunder Levin, the writer of the films has steered us well,” said Ian. “I am hoping this is a seven course meal! I would like the third installment to be taken to foreign shores! Sharkpocolypse Now!”

The actor, who rose to fame on Beverly Hills 90210, is thrilled to be a part of the cult franchise. “Are you kidding me? I am the luckiest guy in the world!”

Are you excited for Sharknado 3?