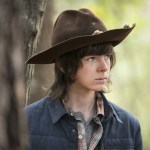 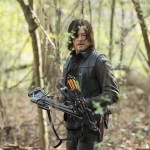 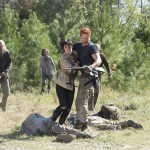 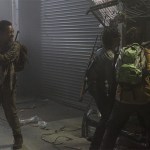 In what Andrew Lincoln described as one of the most ‘brutal’ episodes of ‘The Walking Dead’ ever, Rick keeps a very important promise he once made to Gareth.

On the Oct. 26 episode of The Walking Dead, Rick Grimes (Andrew Lincoln) comes face-to-face with Terminus’ former leader, Gareth (Andrew J. West), once again. Will this be the end of the cannibal who turned Bob (Lawrence Gillard Jr.) into a barbecue dinner?

Nothing like some horrific zombie close-ups to start off a new episode of The Walking Dead, right?

Is anyone else really enjoying Gareth’s little bits of wisdom? A particularly important tidbit that Gareth shares is that the markings on the tree actually belong to the Termites.

“We marked our way here so that we could find our way back,” he explains. Interesting.

Bob’s laughter tells us everything we need to know before he speaks. Even though it was unconfirmed before, we now know that Bob was, in fact, bitten by a walker inside the food bank in episode 2. Boom.

Watching Gareth’s crew of cannibals freak out about this is hilarious. That’s right, Termites. You just ingested meat that is in the process of turning.

‘The Walking Dead’: Why Rick Needs To Follow Abraham To D.C.

But unfortunately, we don’t know what this means just yet. We know that everyone is infected, but do the Termites know? And does eating tainted meat mean that they will turn without being killed?

This will be very interesting to watch unfold.

As Bob is ruining the Termites’ meal, Sasha is searching for him in the woods surrounding the church. When she bumps into Tyreese (Chad Coleman) and Rick, she tells them that someone has been watching them.

Once they go back into the church, Sasha (Sonequa Martin-Green) confronts Father Gabriel (Seth Gilliam) and seems convinced that he is connected to Bob’s disappearance. She also thinks Carol (Melissa McBride) and Daryl (Norman Reedus) are missing, even though they consciously made a decision to follow the car that took Beth in episode two.

It is Rick who backs Father Gabriel into a corner and finally gets him to admit his sins. His story is vague, but by the sound of it — and this is a grand assumption — a family died because of him. He even “buried their bones” based on the story he just told.

Now, he’s convinced Rick and the gang were sent by God to punish him. He curls up in the fetal position on the altar and awaits his fate, but it does not come.

Instead, there’s a whistle outside, and one look out the window shows that Bob is laying in the grass right outside of the church — one leg and all.

Once he’s inside, he tells them about Gareth and his group, where they are, what they did, and that he’s been bitten.

Abraham (Michael Cudlitz) thinks it’s time for a reality check and announces that they are leaving for Washington D.C. Like, right now.

Rick immediately disagrees, because he’s already plotting how to kill Gareth — and he wants to do it as soon as possible.

You can actually see the tension in the room growing, like it’s a character on the show. When Abraham and Rick come face-to-face over their disagreement, things escalate quickly.

Interestingly enough, it’s Glenn (Steven Yeun) who gets in between them. Abraham demands to leave, with the school bus they fixed, at that very moment to avoid losing any more members of the group. However, he’s also prepared to leave without them.

Rick thinks retaliation is necessary, and then they can leave. He also thinks Abraham has no right to take the school bus, and even though no one is backing him up on that I can’t imagine they would be too thrilled for him to take it.

Glenn makes a compromise: If Abraham will wait until they are done killing Gareth, he and Maggie (Lauren Cohan) will leave with them to Washington, D.C.

Rick tells him no way, and Glenn quickly lets him know that it is NOT his choice. Ouch. So much for the Ricktatorship.

Now that things have calmed down, Rick and the group put together a plan of attack. They are leaving almost immediately.

It is Tyreese who is left behind, and Sasha has given him a knife to put through Bob’s temple once he stops breathing.

In one of the most terrifying scenes I have ever seen on The Walking Dead, we watch as Rick and the gang walk into the woods and disappear. Moments later, a group of people — Gareth, of course — descend from another part of the woods and approach the church.

Inside the church are Eugene (Josh McDermitt), Rosita (Christian Serratos), Father Gabriel, Bob, Carl (Chandler Riggs), baby Judith, and Tyreese. That’s it. They have barely any other protection. Apparently, Rick didn’t think about this. At all.

Gareth calls out to each one of them once inside the church, letting them know that he knows exactly who they are — and exactly who is not with them to protect them.

He even tries to sway Father Gabriel, who is sitting in a corner clutching his rosary beads, by telling him if he outs everyone else he can walk away without a scratch. This probably isn’t true, but it’s nice to see that Father Gabriel doesn’t immediately jump at the chance to survive this. Maybe he isn’t a bad guy after all.

It is also worth mentioning that the tension inside the church has appeared again. This time, it’s the kind of tension that makes your back ache as you await something terrible.

Rick Gets To Keep A Promise He Made To Gareth

Just when you think things are about to take a turn for the worse, two shots are fired — instantly killing two of Gareth’s cronies.

Then, another shot takes off two of Gareth’s fingers. It’s Rick’s voice you hear telling them to put their guns down and get on the floor. Gareth, writhing in pain, immediately does so and demands his gang of cannibals follow suit.

Gareth begs for Rick to let him and his remaining friends go. He promises that they’ll never cross paths again. Apparently, just a tiny bit of pain is all it takes to get Gareth on his knees — literally.

But then comes the best line ever delivered by Andrew Lincoln throughout this series: “Besides, I already made you a promise.”

Within seconds, Rick drops his gun and pulls the machete with the red handle out of his back pocket. Before you know it, Rick is whipping the machete over and over and over again until there is barely anything left of Gareth other than a pile of mush.

As this is happening, Sasha is brutally killing another member of Gareth’s group, and Abraham the third. Once they are dead, Rick reminds everyone that is gawking in horror that it could have been the other way around. He’s right, but that doesn’t mean his own group isn’t already concerned about how far Rick is now removed from his sanity.

Once they’ve walked away, Father Gabriel is forced to survey the damage of the blood-splattered walls of his church.

“This is the Lord’s house,” he says, horrified.

“No, it’s just four walls and a roof,” Maggie tells him.

The following day, The group says their goodbyes to Bob, who is not doing so well. He’s slowly but surely dying on a couch in Father Gabriel’s office. As the group leaves the room, Bob requests to speak to Rick alone.

Bob reminds Rick that he’s a good guy. He once took people in, he once saved people. And a few of his final words to Rick are that “nightmares shouldn’t change who you are.”

And to think, Bob didn’t even witness the horror movie that was Gareth’s death inside the chapel the night before.

Moments later, we see Bob waking up from a nap to tell Sasha about a good dream he was having. Then, he stops breathing. Just as she is about to plunge a knife into his temple, Tyreese walks in to take the job from her.

Tyreese is definitely getting his game back, mostly because I think he realizes he does not have a choice in the matter.

Once Bob is gone, Abraham makes it known he is keeping his word by hitting the road to Washington, D.C. with Eugene and Rosita.

Abraham gives Rick a copy of the map he plans to follow, just in case they ever want to try catching up.

After they leave, with Maggie and Glenn in tow, Rick opens the map to find a note from Abraham: “Sorry I was an asshole. Come to D.C. The world needs Rick Grimes.”

He’s right, and I think Rick knows he’s right, but… now what?

In the final scenes of the episode, Michonne (Danai Gurira) hears something in the woods outside of the church and goes to investigate. It turns out to be Daryl, and Michonne is thrilled to see him. That is, until, she realizes that Carol is not with him.

When she asks where Carol is, Daryl looks behind him and says to, hopefully, Carol: “Come on out.”

Then, fade to black. We do not see Carol. We do not see anyone “come on out.” I have never been so concerned about Carol in my life of being a Walking Dead fan.

The good news? The preview for episode four revolves around Beth (Emily Kinney) and Beth alone. Finally, some answers!

Alright, The Walking Dead fans — What did YOU think about tonight’s episode? Are you glad Gareth is dead? What do you think is up with Carol? Comment below with your thoughts!