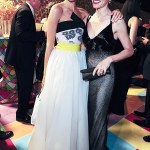 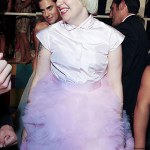 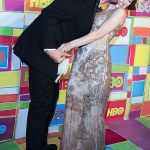 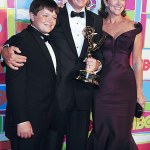 Sofia didn’t have new boyfriend Joe Manganiello by her side at the Aug. 25 Emmy Awards, but she still managed to have a blast dancing with Derek at the HBO after party! HollywoodLife.com has the amazing video footage, in which Sofia suffers a MAJOR nip slip — Watch!

Oops! Sofia Vergara, 41, got SO into her epic dance routine with Dancing with the Stars pro Derek Hough, 29, that her cleavage almost spilled right out of her stunning strapless dress! Sofia managed to contain most of her ample bosom — but unfortunately her nipple peeked out when Derek pulled a fancy dance move!

Sofia Vergara Nip Slip At Emmys After Party: Her Dance With Derek Hough

This was bound to happen sooner or later. While Sofia and Derek were dancing up a storm to Kenny Loggins’ “Footloose” at HBO’s Emmy Awards after party on Aug. 25, Sofia fell victim to a nip slip when the Dancing with the Stars champ picked her up, spun her around and then dipped her!

Onlooking partygoers caught the moment on camera, including a HollywoodLife.com source, who explains how the wardrobe malfunction came about.

“Just before the song “Footloose” was on, Derek tried to dance with his sister [Julianne Hough, 26,],” the source tells us EXCLUSIVELY. “She didn’t want to dance so he took Sophia and danced with her. His sister then got jealous and yelled in his ear, ‘This is my song!’ But he blew her off to dance with Sophia.”

Who could blame him?! But don’t worry, Sofia and Joe Manganiello shippers — our source added, “They were having a lot of fun but it was not romantic at all.”

Sofia Vergara: Joe Manganiello Is ‘Too Sexy’ For The Emmys

In case you were wondering why Joe, 37, didn’t attend the Emmys with Sofia, she answered that question on the red carpet!

“He’s really hot, that’s why I didn’t bring him,” Sofia told Giuliana Rancic on the E! Red Carpet before the show. “He’s too hot, too tall, he takes a lot of space! I’m like, ‘Listen, please Joe, don’t come.’ He’s too hot, too sexy.”

We could say the same thing about you, Sofia!

So HollywoodLifers, what do YOU think of Sofia and Derek’s dance moves? Do you think Sofia should be embarrassed about her nip slip? Let us know!