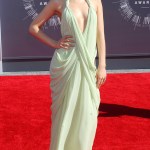 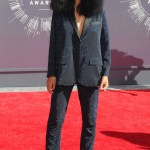 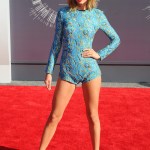 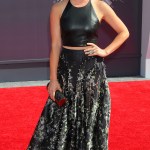 Yet again, Ariana Grande proved that she has one amazing set of pipes! Performing her huge summer hit, ‘Break Free,’ the singer brought the house down at the MTV Video Music Awards.

Ariana Grande, 21, opened the MTV VMAs on a high note! Singing her summer hit, “Break Free,” while coming out of a huge space ship, her performance was definitely out of this world! Do you agree?

This girl can sing! As if anyone was not sure if Ariana was a super star, she certainly proved her abundance of talent on Aug. 24, at the MTV Video Music Awards. Looking stunning in a silver beaded corset outfit and thigh-high boots the pint-sized artist rocked the stage while performing “Break Free.”

Showing off her amazing body, Ariana’s corset top accentuated her killer waistline and mile-long legs. Opening the show in a huge way, the singer took a cue from Lady Gaga and arrived on the stage coming out of a space ship! The crowd went wild, and she was definitely the right choice to kick this high-energy show off on the right foot!

Ariana is semi-new to the stage after bursting into the spotlight last year after releasing her huge hit, “The Way.” This summer she proved that she is the queen dance hits with the release of “Break Free” and her huge song, “Problem,” with fellow nominee, Iggy Azalea.

Wearing her signature half-up, half-down hairstyle, she oozed confidence and has never looked better! Ariana is nominated for a total of four awards including, “Best Female Video.”

Watch her full performance below!

What do YOU think, HollywoodLifers? Is “Break Free” your favorite Ariana Grande song? Let us know your thoughts below!