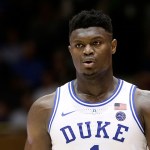 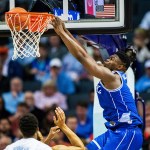 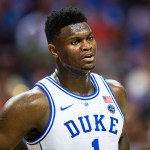 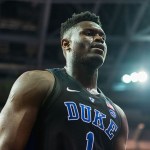 As expected, Duke’s star forward Zion Williamson entered the NBA draft after his freshman season and to the surprise of no one was the number one pick, going to the New Orleans Pelicans.

UPDATE 6/20/19 8:15pm EST: During the June 20 NBA draft, Zion Williamson was the number one overall pick, selected by the New Orleans Pelicans. The week prior the team traded Anthony Davis to the Los Angeles Laker to free up cap space to land Zion, who has been called one the best players in a generation. Zion had always intended to play one season for Duke then enter the draft.

When the 2019 NCAA Men’s Division I Basketball Tournament (aka March Madness) bracket was revealed on March 17, it was not surprising that Duke was named one of the tournament’s No. 1 seeds. The 29-5 team had just beaten Florida State on March 16 to claim the ACC Tournament, going 73-63 on the strength of Zion Williamson. The 18-year-old freshman has both college and professional basketball fans buzzing, as he’s averaging 22.1 points, 8.9 rebounds, and 2.1 assists. Before Duke takes on the winner of the NC Central / North Dakota State game, here’s what you need to know about Zion.

1. He’s a North Carolina native. The 6’7” tall Zion Lateef Williamson was born on Jan. 6, 2000 in Salisbury, North Carolina. His mother, a middle school health teacher in Greenville, moved her family to South Carolina after her mother died in 2002, according to the Charlotte Observer. Zion attended Spartansburg Day School and was averaging 364 points, 11.4 rebounds, and 3.5 assists in his senior season. He committed to Duke in 2018.

2. He comes from a sports family. His mother, Sharonda Simpson, ran track at Livingstone College in Salisbury, North Carolina, according to ESPN. That’s where she would meet Zion’s father, Lateef Williamson, a 6’5, 260-pound defensive end who played for NC State before his academics cost him his scholarship. His massive frame (as of March 2019, ESPN lists him at 285 pounds) comes from his father, but came late in life. “I didn’t get this size until my junior year of high school,” Williamson told ESPN. “And my school doesn’t have a football team.”

3. He has a Marvel-ous nickname. His teammates called him “Zanos,” according to ESPN, just like the supervillain Thanos from Avengers: Infinity War. Considering no one could stop Thanos from pulling off his mission – spoiler alert – and Duke is heavily favored to win the 2019 March Madness tournament, the nickname seems appropriate.

“I appreciate that people think that, give me the comparisons to LeBron, but I’m not LeBron. I’m myself. Before I got big, I was playing point guard, so I’m kinda like a pass-first person. Some people tell me I should be more selfish, but that’s not me,” he

"I wouldn't be here without my mom. She did everything for me."

What a moment for Zion Williamson, who shed tears after being drafted No. 1 overall. #NBADraft pic.twitter.com/WBVSRPr04K

Things are happening! The #NBADraft is already full of action and the first pick (Zion) hasn’t even been read yet.

Keep up with draft day here:https://t.co/h9W4brmn2I

5. His shoe went viral – after they exploded in a game. During Duke’s Feb. 20 game against bitter rivals, UNC, Zion suffered a terrifying injury in the opening seconds of the game. Zion went down after the blue rubber sole of his Nike PG 2.5 PE sneaker came apart at the seams, sending him tumbling to the floor. He suffered a knee sprain that took him out of the game (one that Duke would lose) and Nike, adding insult to embarrassment, suffered a stock dip the next day. For the 2019 March Madness tournament, Zion’s rocking Nike Kyrie 4s that have been reinforced for his massive frame.